Whether you’re a fan of the iconic pony car or not, there is no denying a rare few Mustangs are very special cars. One such example, a 1967 model, is a feature car at SEMA this year, and it might be the most important Mustang you’ll ever see on the show floor.

This particular car wasn’t owned by Carroll Shelby and it wasn’t a factory race car, but the story of where it came from and how it’s getting to SEMA is one for the books.

This Mustang’s storied journey begins with a very special owner- Matt Henry. Henry is a father of 6 from Imperial Beach California who saw a Mustang languishing under a tarp a few years back and thought it’d be fun to learn hot rodding.

One more thing about him- he’s living with inoperable brain cancer.

Henry persisted and convinced the owner he’d give a good home to the forgotten project. As promised, he ended up with a shell of a ‘67 coupe with a chopped roof, shortened trunk, suicide doors, and parts scattered all over, still bearing forklift marks from the salvage yard that nearly crushed it. With a little help, he got the car running, screwed in a plexiglass windshield, and took it out on a few adventures.

Before long the car was leaking and burning every fluid imaginable, but Henry was determined to keep his beloved car on the road and make some bucket list memories with his family. 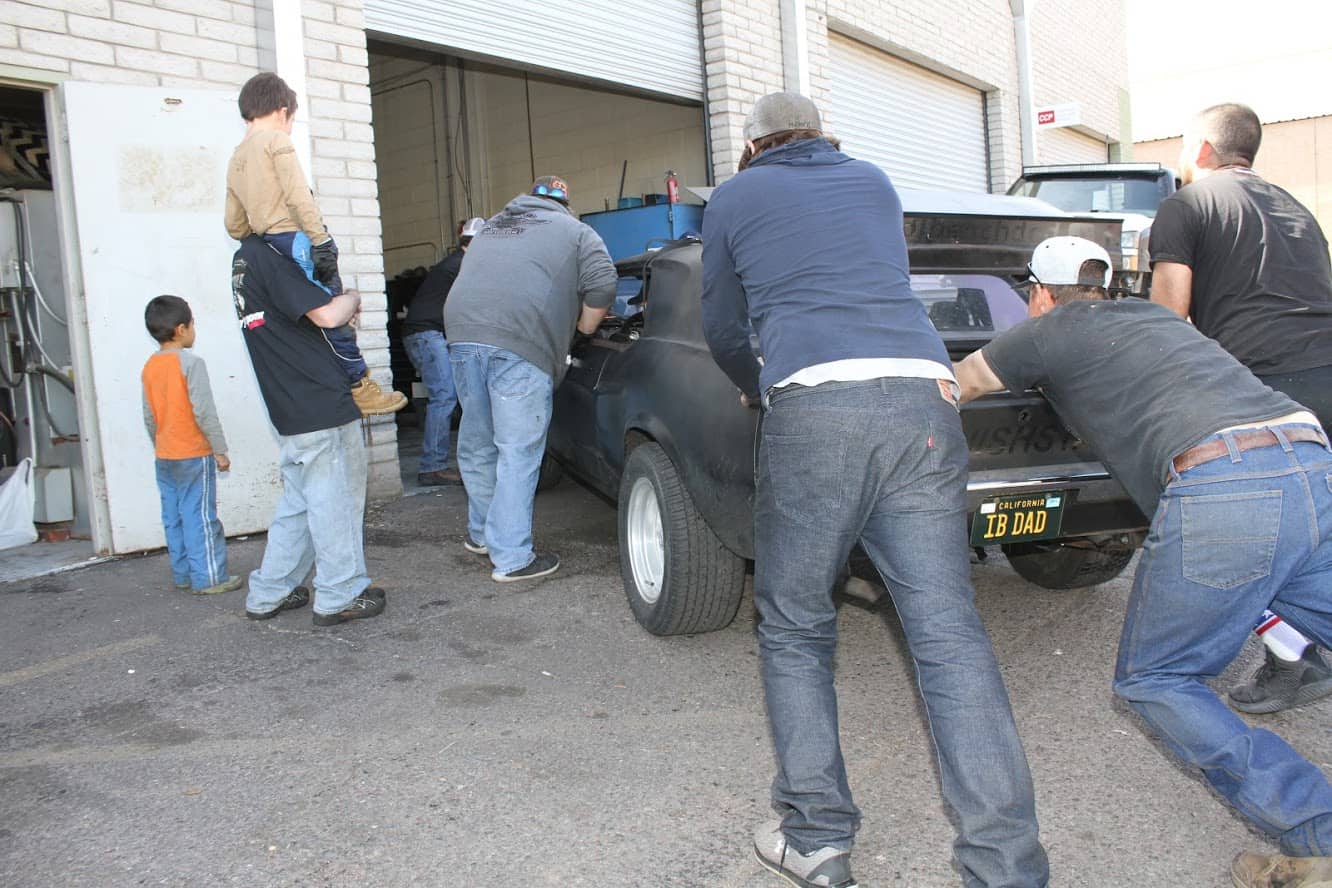 Where there’s a will in the car community, there is always a way- seeing an opportunity to help his situation, a group of friends and near-strangers made a plan to keep Henry’s car on the road with what they had.

In need of a complete drivetrain, the crew began emptying their part stashes and pockets to put a 5.3 LS motor and overdrive transmission in the car. Unconcerned with the fact Henry’s car lived over 400 miles from its new heart, a plan was cemented to drive the car to Tucson with his 2 sons for a one day swap in the middle of the 2019 Zip Tie Drags. 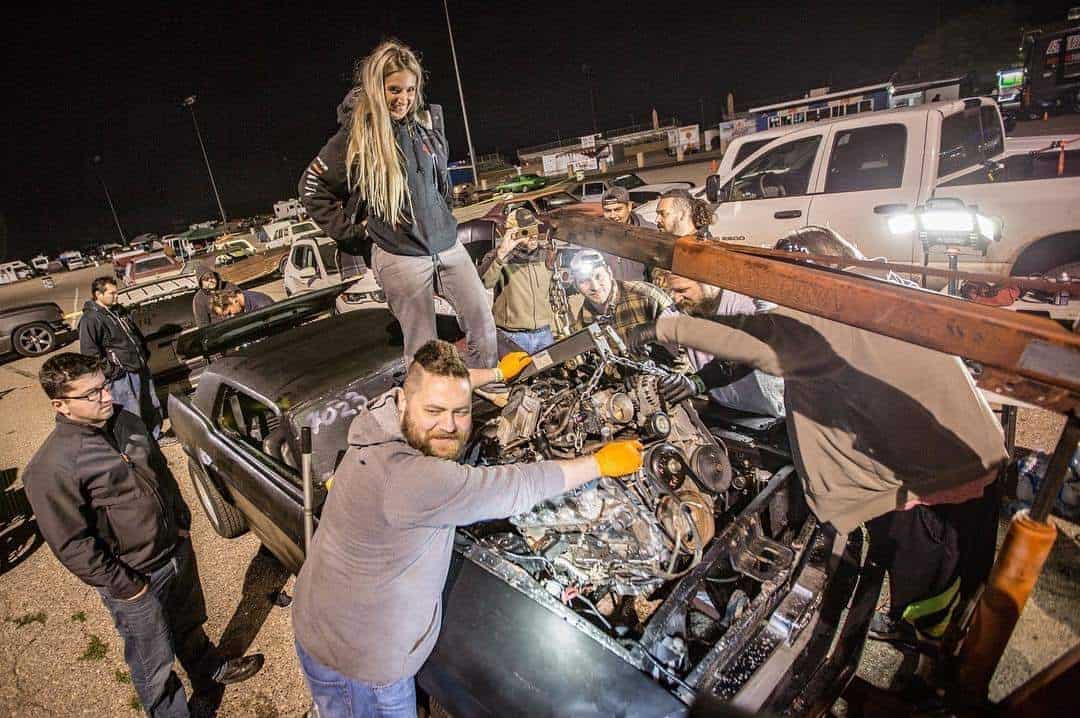 The owner of Tucson Dragway, Jim Hughes, deemed the effort the “most impressive feat of hot rodding he’d seen in decades”, moments before the car made its first pass under LS power.

Typically pulling off a build like that is the peak of a story, but things had only begun to get interesting for Henry and his fated car. 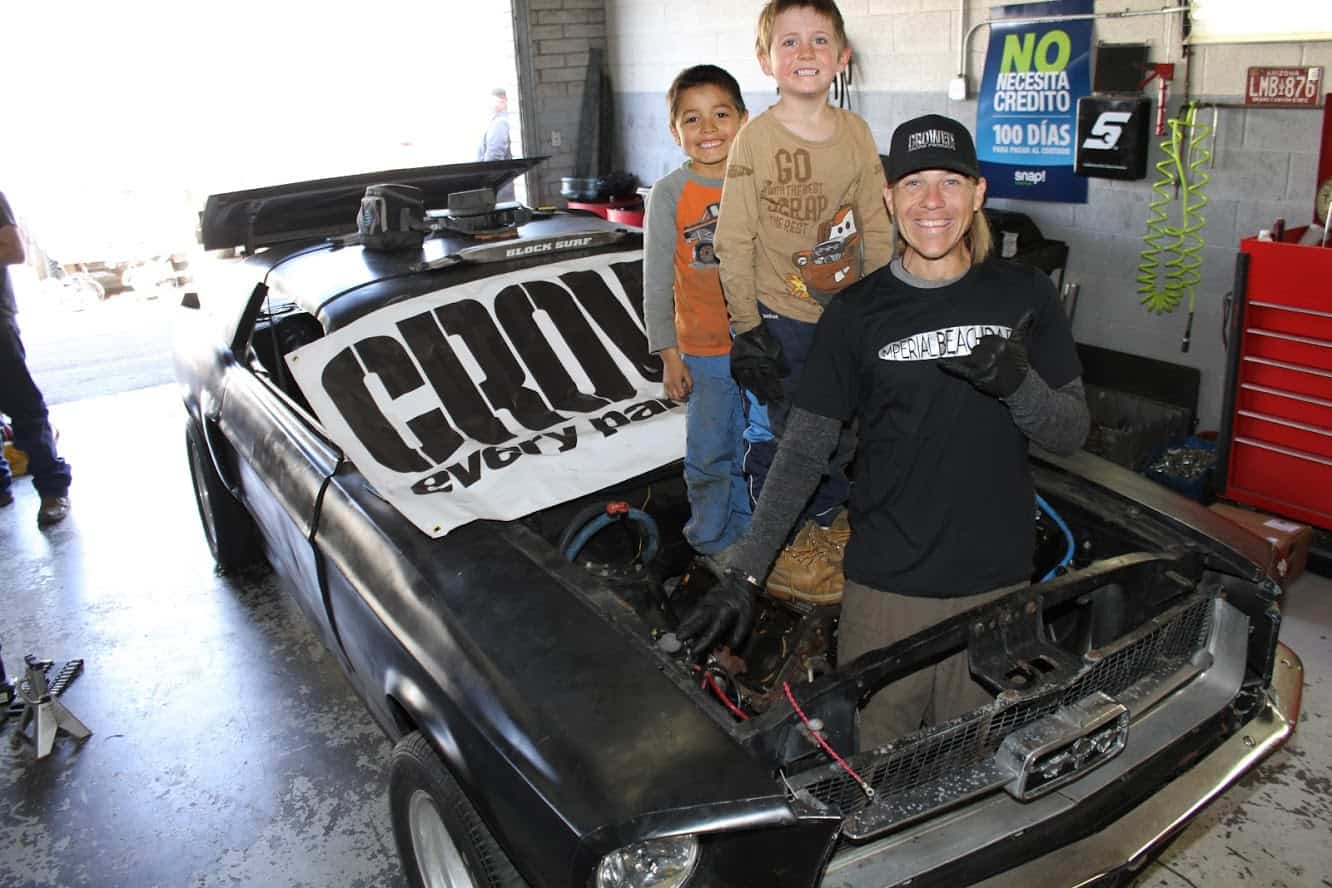 Over the course of the year, Henry was also blessed with help from his friends, big-name companies, and total strangers. What began as a twisted shell turned to a serious hot rod in driveways, parking lots and borrowed garages in several states along his adventures.

Hearing what the build was about, many jumped at the opportunity to help, expecting nothing in return. Thanks to the generosity of the community, the car, dubbed ‘Punishstang’, was outfitted with a complete valvetrain, heads, accessory drive, roll cage, a custom harness, disc brakes, racing tune, and new custom suspension. 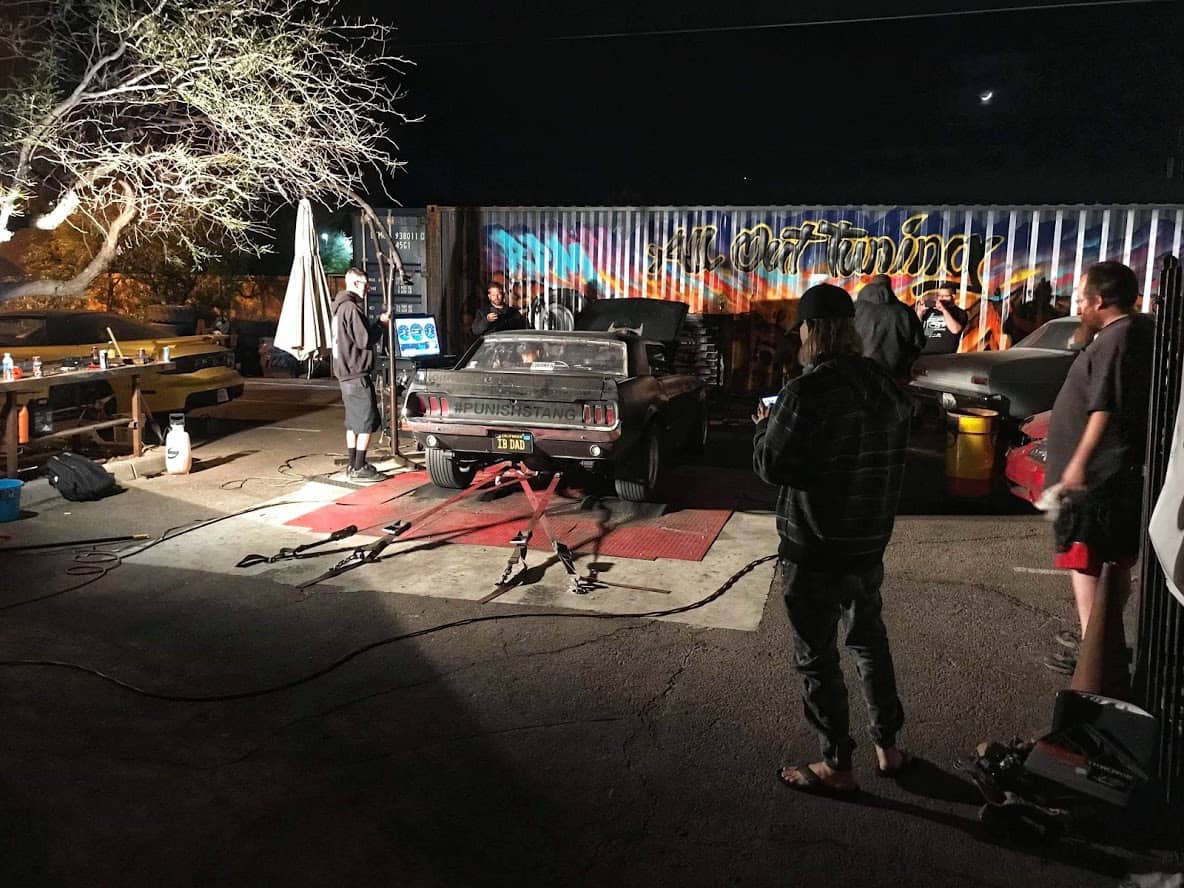 In true hot rodder fashion, Henry drove the car to and from every stage of the build, generally without windows, grinning the entire way.

Thanks to all the new friends, Henry was able to follow his vision and put more than 10,000 miles on the car adventuring with his kids and daily driving in a matter of months.

He and his car trekked to LS Fest West, the Hoonigan Burnyard, and drove all the way across the country and back for Hot Rod Power Tour, stopping to repair, diagnose, and meet helpful strangers an untold number of times. Each time someone helped him and his old muscle car on their journey, Henry had them sign the inside of his passenger door. 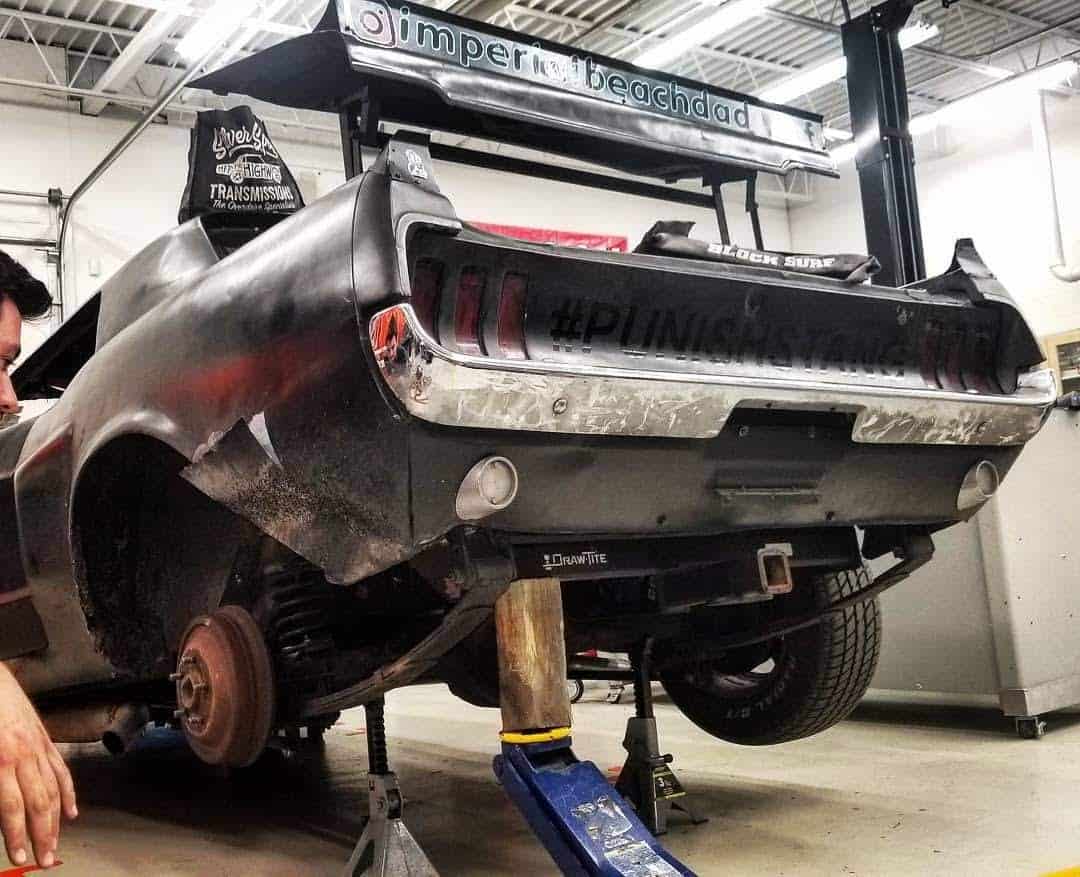 Henry’s car became a rolling billboard for adventure, each scar and signature a testament to the great places it had been and the people who got it there. More than any VIN plate can ever tell, the car is writing a story of its own each and every day.

Amid all this, some fans of Henry and his car in the auto industry made a phone call and a dream came true: the Punishstang is at SEMA — Right next to all the six figure builds and billet art, there you’ll find it in all its scarred glory. 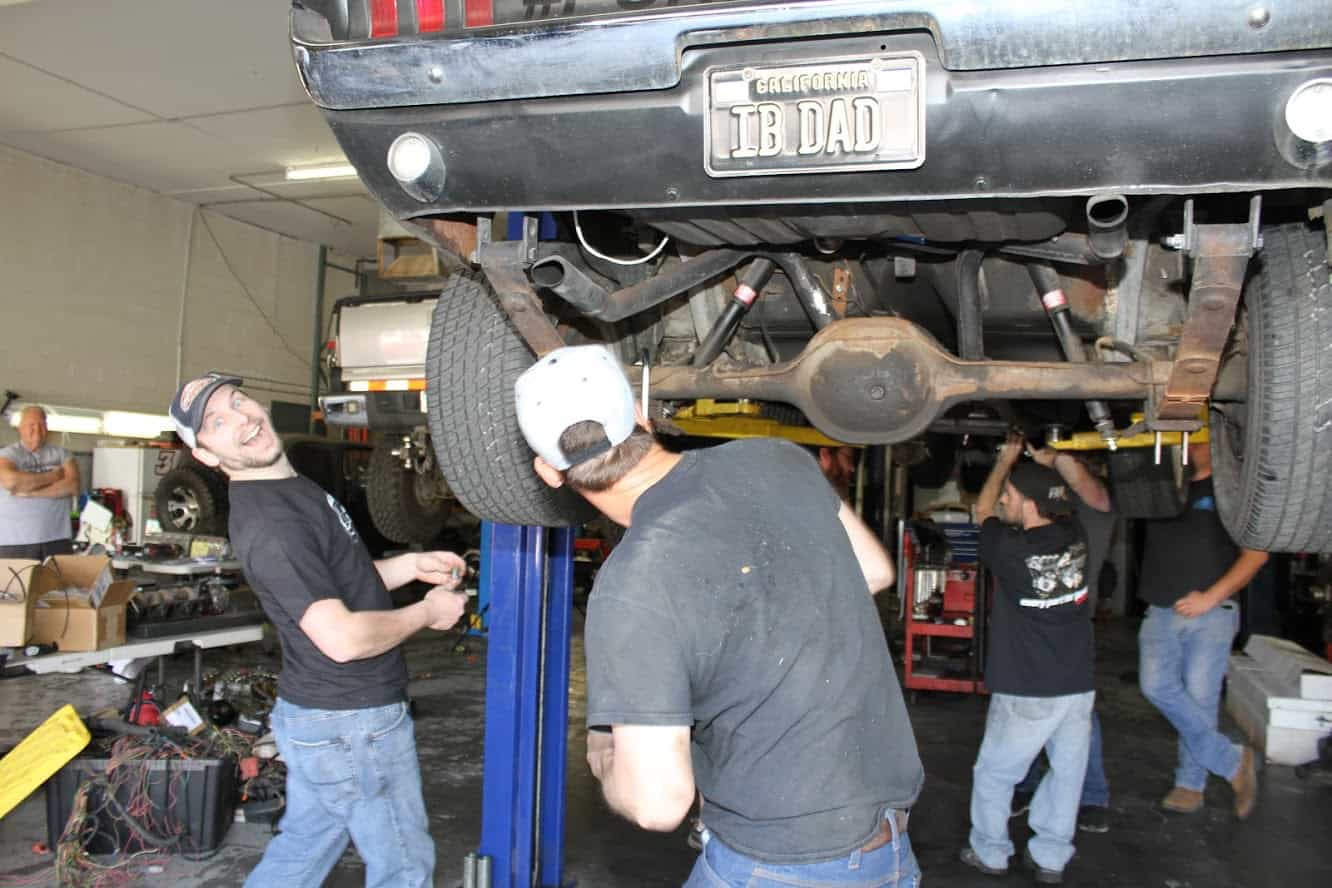 If you can make your way to the platinum lot, odds are there will be a bit of a crowd gathered. A little unusual for the show, they won’t be asking who used to own it or looking for a build sheet. They’ll be eagerly waiting to shake the hand of the owner, to hear where it’s going next, and getting reminded to enjoy the little things.

Henry’s ‘67 Mustang isn’t special for its pedigree, price tag, or perfection — it’s a car that brings people together and makes life a little bit sweeter. It’s a reminder that life is short and what counts most isn’t the cover — it’s the story within. 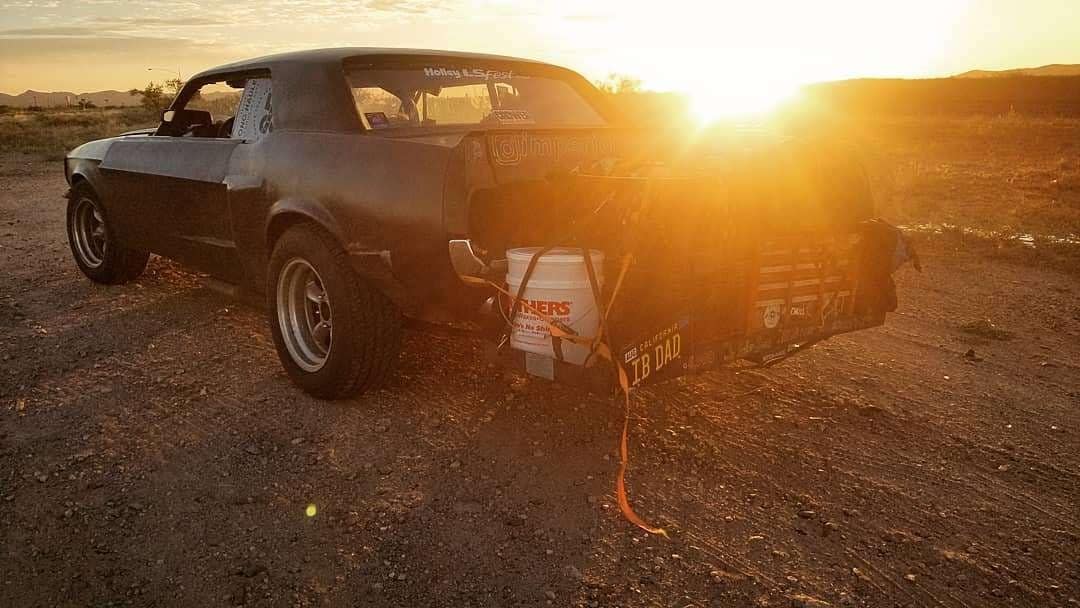 March 30, 2019 Roadkill Customs Builds and Examples
Watch how the Classic Car Studio mechanics transform a 1953 Ford F-100 from a farmland hauler to an ass-hauling racer! [More…]

November 3, 2021 Roadkill Customs Builds and Examples
Rick, a fabricator at South Side Sleds Custom Cycles & Hot Rods recollects building his 1931 Ford Model A Gasser over the course of 8 years. [More…]