Take one quick look at the Kilburn Kustoms’ 1966 F-100, and you know that Glenn Cutts has put together one beast of a hot rod. This roadkillin’ muscle truck is an amalgamation of factory original parts, aftermarket goods, and Frankenstein modifications.

The original frame remains in place but has been notched in the rear to accommodate the lowered stance. The front of the frame is heavily modified using an independent front suspension from a Police Interceptor P71 (Ford Crown Vic) to help replace the original Twin I Beam configuration. Air-assisted front and rear shocks further lower the modified suspension. 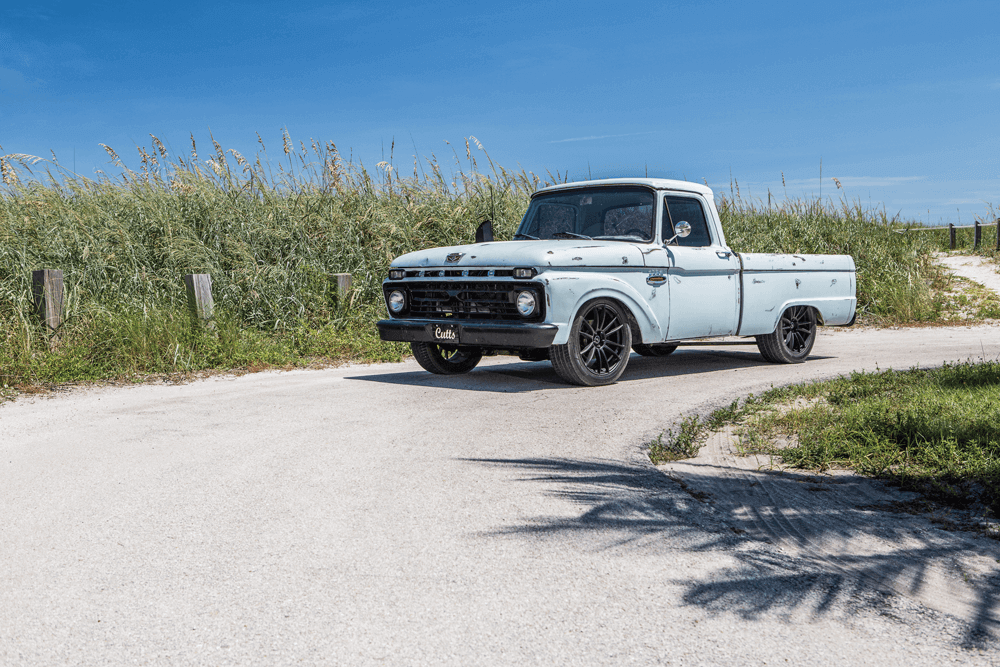 The modestly lowered ride height is accentuated by the F-100’s aggressive wheels. Kilburn selected a set of 20-inch R959’s from Ruff Wheels. The splitsix spokes are finished in satin black for a menacing contrast with the exterior patina. The wheels are squared and matched with 245/35/20 tires from NITTO. 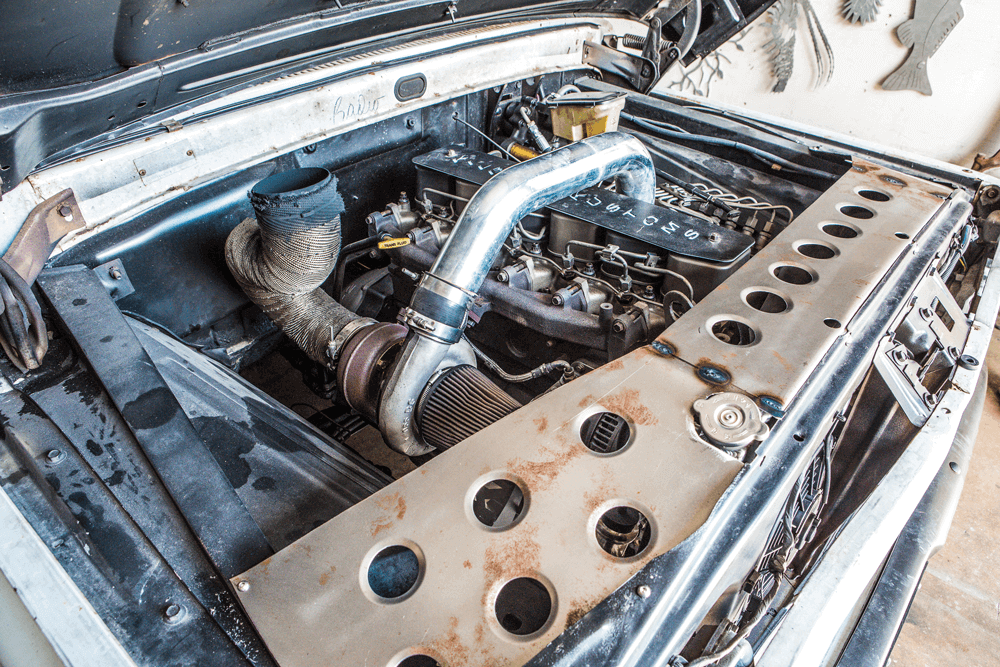 The real moneymaker of Glenn’s ’66 patiently lurks underneath the hood.

Glenn spent some time debating what modern drivetrain to adapt to his Ford and finally settled on 5.9L Cummins turbo diesel motor, and we certainly can’t fault him for that. The Cummins ISB is a straight-six motor capable of around 600 ft-lbs of torque. 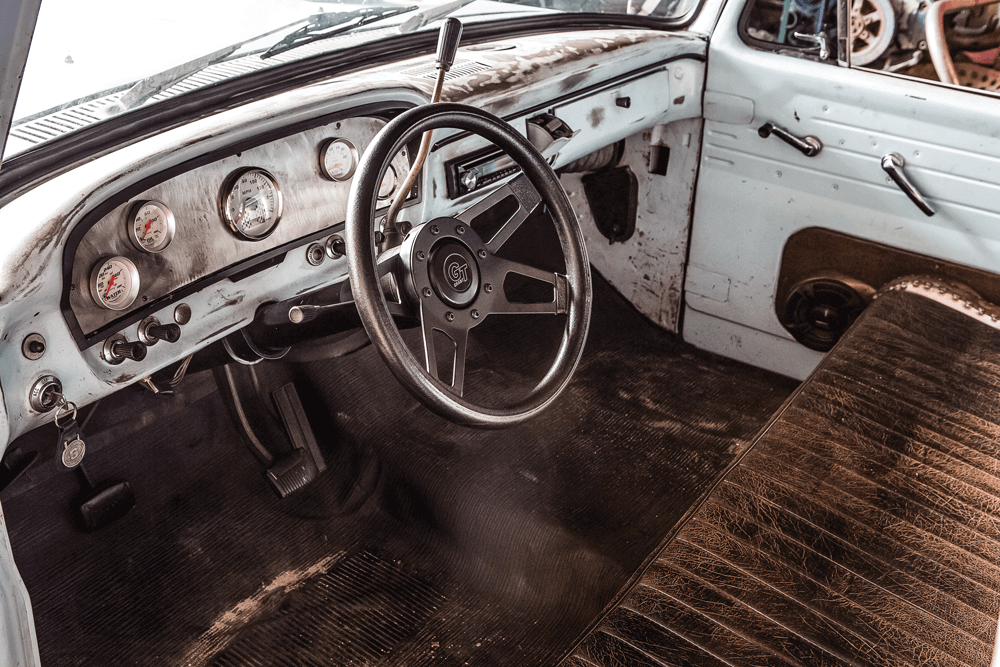 Glenn grafted his Cummins turbo diesel from a 1999 Dodge Ram. Its application in the 1966 F-100 gives the Ford more gumption than it was ever intended to have. The result is an entirely new driving experience, making Glenn’s truck a one-of-a-kind beast—or hot rod. 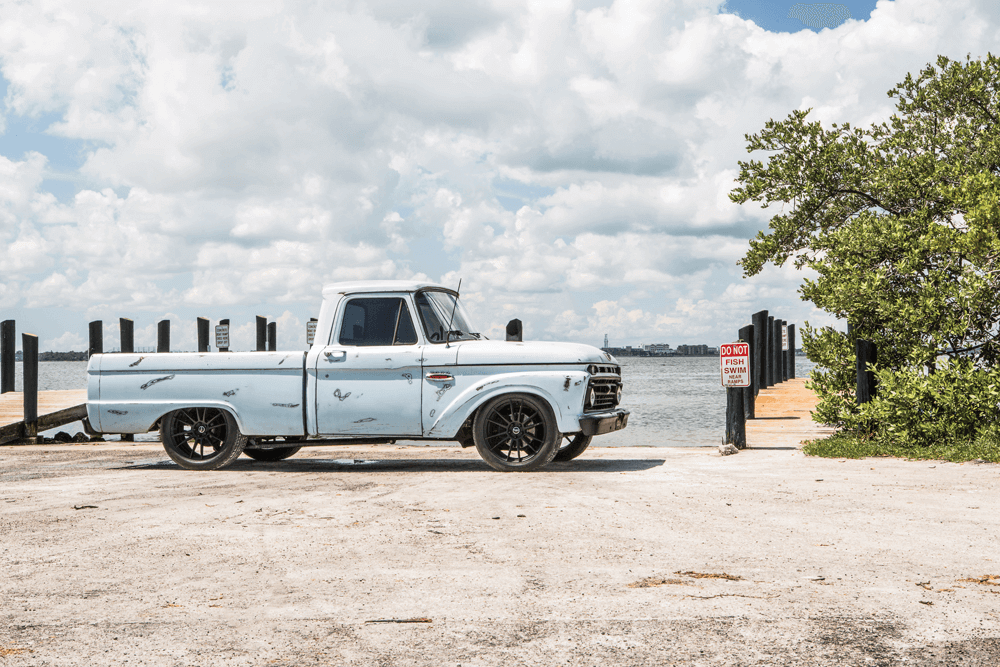 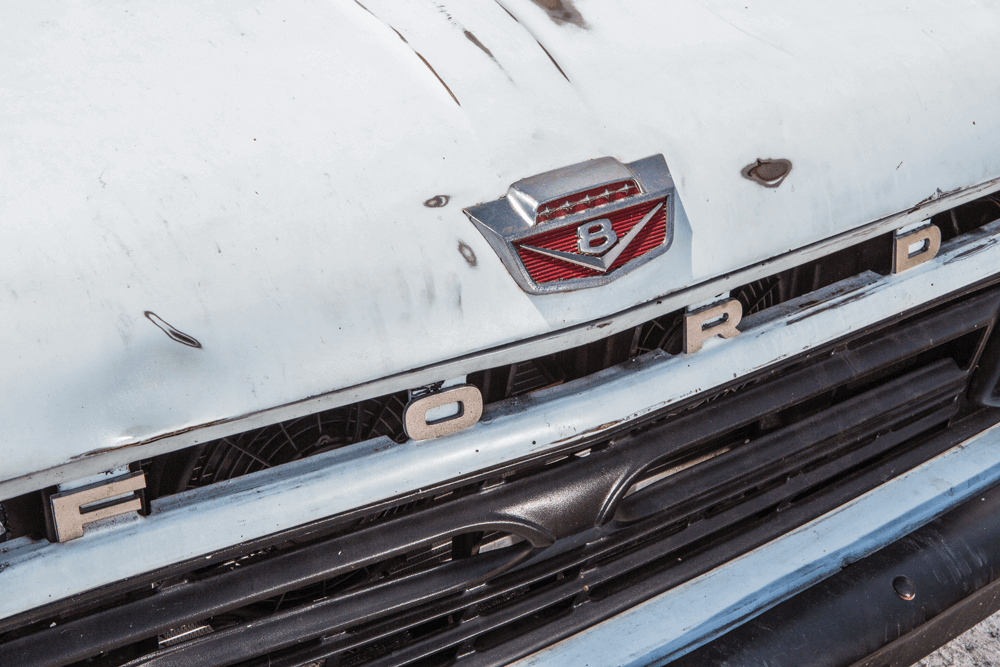 The ’66 Cummins swapped Ford bears a number of minor exterior modifications to finish off the budget-friendly build. The modifications serve to complement the rugged aesthetic throughout. 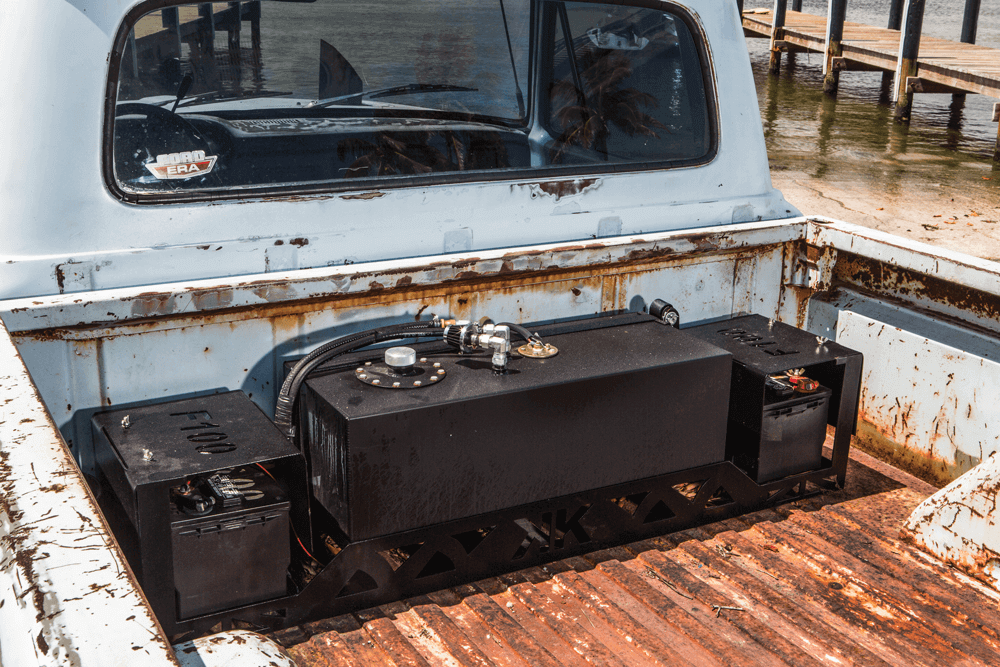 A tastefully augmented patina stretches over the whole body and the faded blue and white shows distress marks of body and paint repair. Both the front and rear bumpers have been repainted satin black to help accent the wheels. 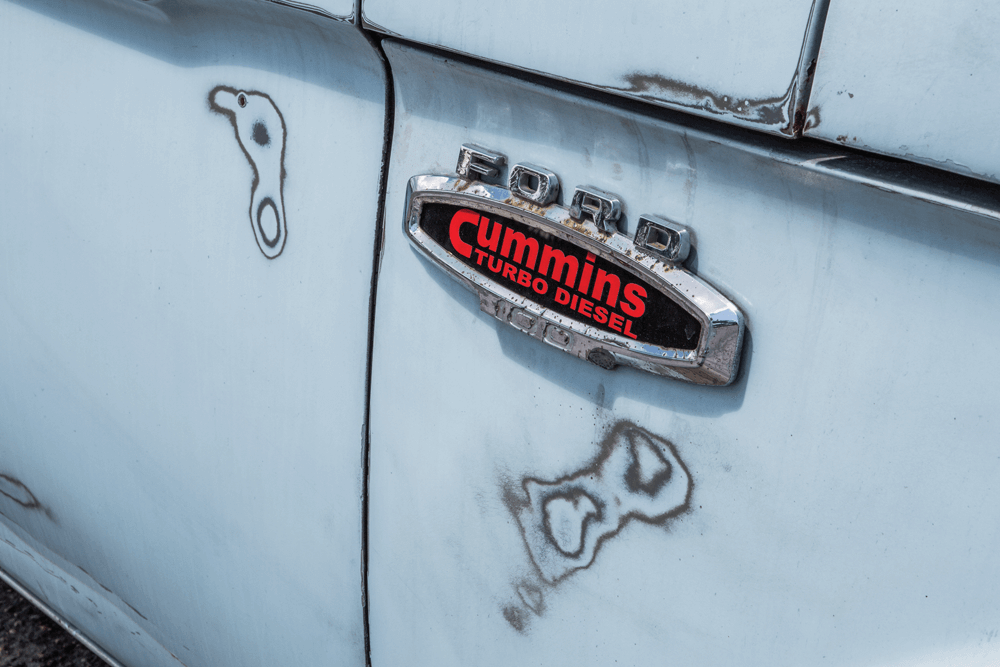 The center section of the original “Twin I-Beam” fender badge, has been replaced with a red-lettered Cummins badge. If this subtle detail doesn’t let road-goers know of the beast beneath the hood, the protruding “smokestack” style exhaust will. The exhaust exits directly through a hood cutout. This feature helps immediately validate the license plate, “66 SMOKE.” 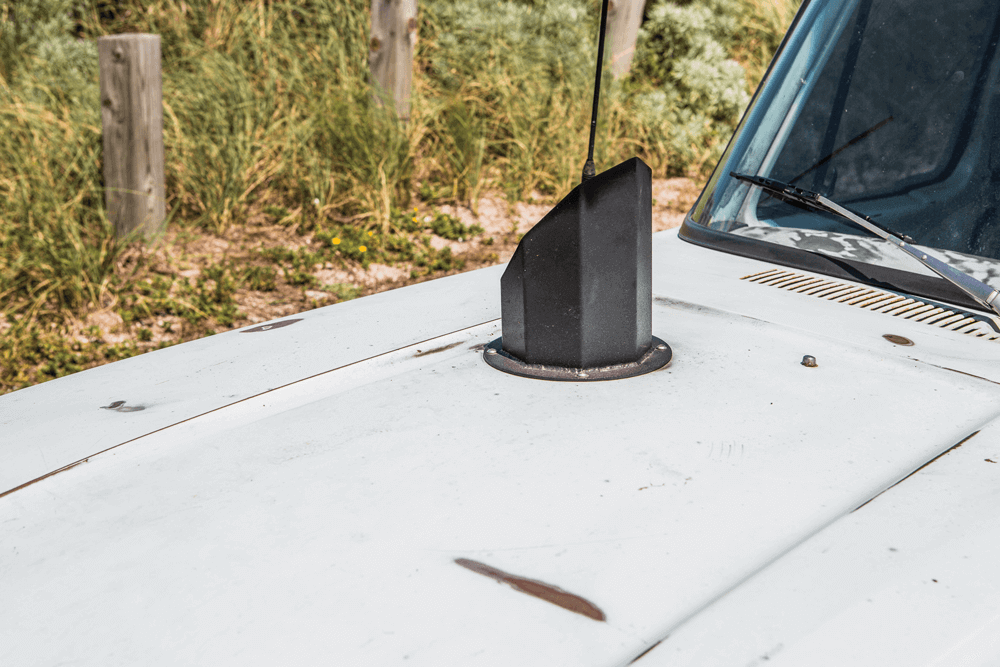 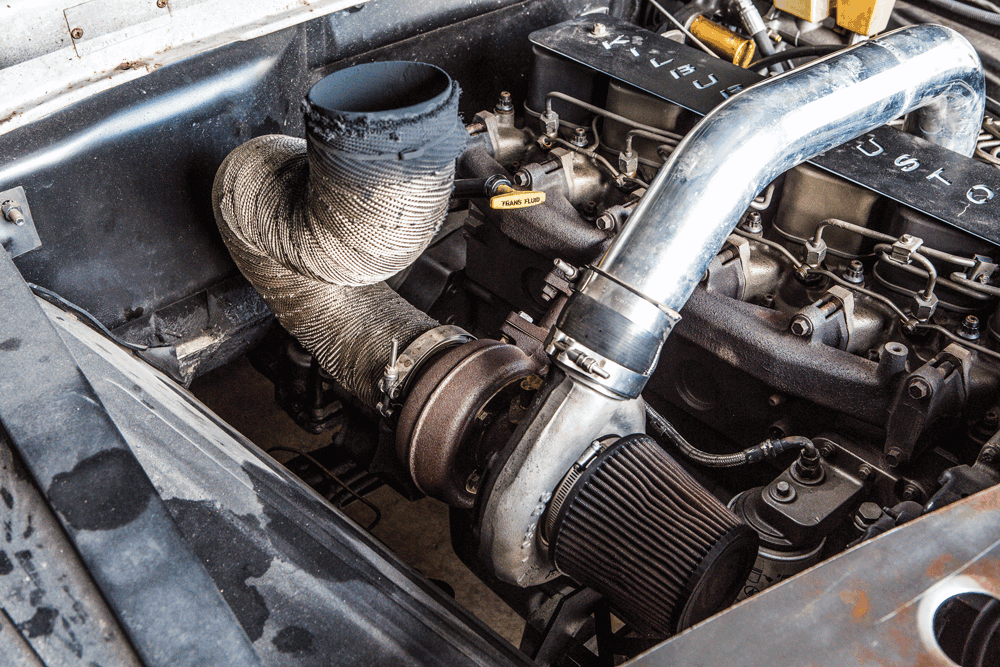 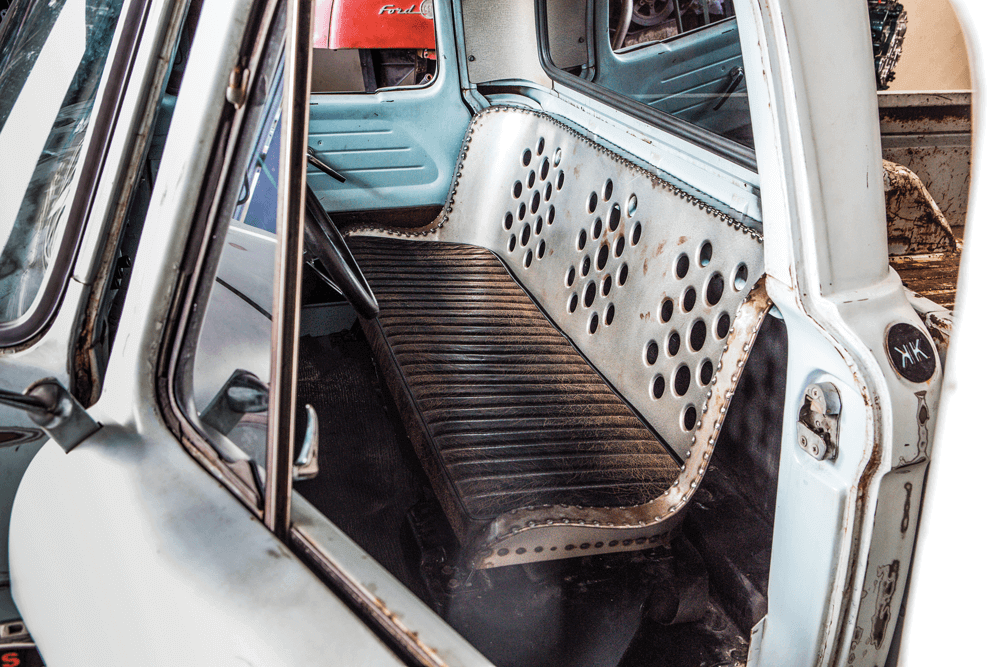 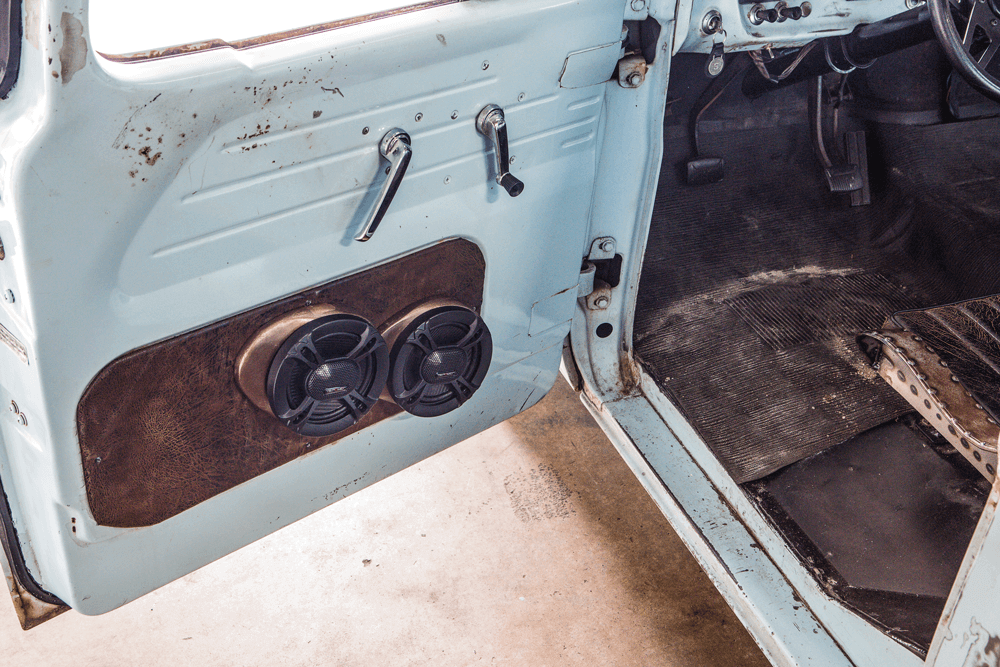 Glenn describes his truck as having been a “dream build” and the ’66 F-100’s spirit remains but has been highly altered by its unique modifications. The lowered stance, big wheels, exterior details, and (most importantly) Cummins turbo-diesel, all lend themselves to the ruggedness of the truck. It’s a special build that accomplishes quite a bit without losing itself in the chaos. It is builds like Glenn’s that truly keep the spirit of hot rodding alive! 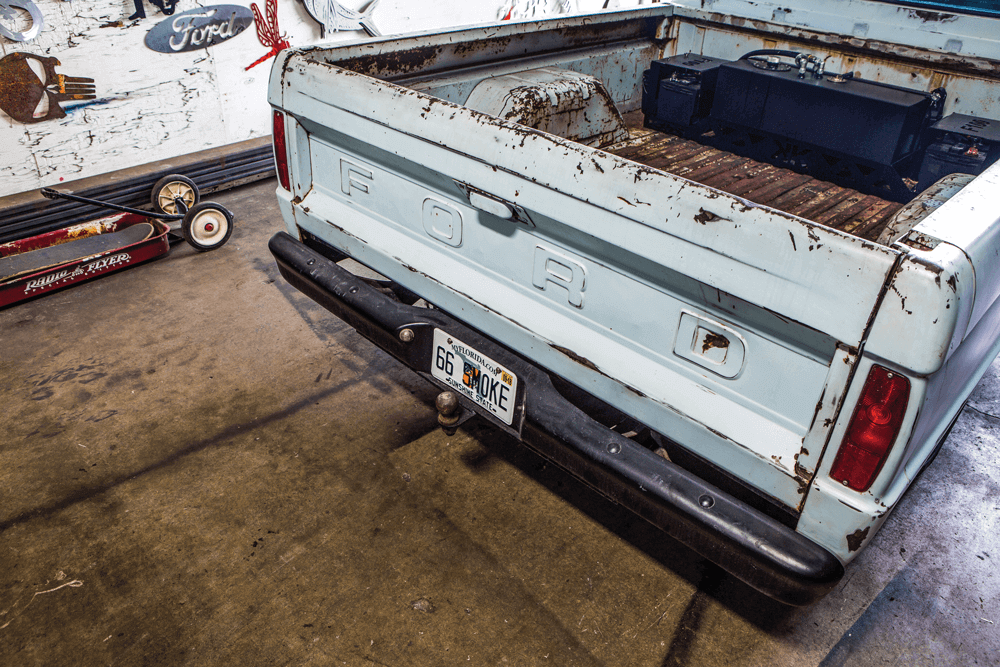