Cool Tools takes a look at wire strippers, a ridiculous amount of
wire strippers. But say right off the bat, that:

“In my opinion, the best wire stripper out there is the one that you are the most familiar with — it’s one of those tools that you really just develop muscle memory for.”

With that said, it’s good to know what’s out there and what to look
for, and what to avoid when hunting for the best wire stripper for your needs. Let’s start with something a lot of us probably already have — manual wire strippers.

These Hakko CHP ones here I’ve probably owned for 10 years, and 9 times out of 10, these are what I reach for when I’m working on electronics.

They don’t take up much room, they’re lightweight and lock up to go in your pocket. They handle 20 gauge all the way down to a 30 gauge and also work as cutters and pliers. If you work on electronics and don’t have something like these handy, you did something wrong.

I also like the spring action that allows you to open and close it one-handed. Most of the options I’ll show you will spring open like this.

But not these. These 8-inch wire strippers from Irwin are intended for electrical work and thicker solid-core wire.

There are a ton of interesting features packed in here — crimpers, pliers, screw cutters. Unfortunately, these are practically useless for me. I rarely work with electrical, and when I do, I prefer a spring-loaded option I can operate one-handed. With these, you have to awkwardly flick them open every time you use them.

I bought these by accident because they come up as an Amazon choice for Wire strippers. What I didn’t know is that the page bundles three different models, and that the more useful, popular models are these 6 and 7-inch ones that have a spring grip. So watch out for that… 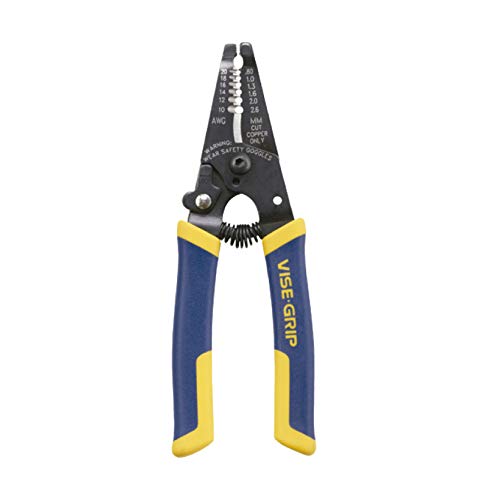 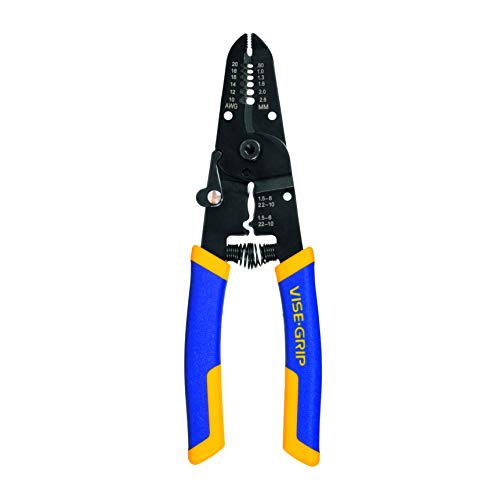 But really, if there’s a Vise-Grip wire stripper to seek out, it’s this one. For around $20, this self-adjusting model is, in my experience, the gold standard for this type of tool at this price.

I’ve got four other variations in a similar design I’ll compare it against, but first, let me show you how these work if you’ve never seen one.

The self-adjusting action on these makes it so that when you place a wire in these within a common range — in this case 10-24 gauge — the jaws will automatically apply just the right amount of pressure to pull the sheath from the wire.

And because it’s more of a clamp and pull motion — not so much about cutting — these are less likely to damage your wire in the process.

The other really cool feature of this design is this adjustable stop block. If you’ve got a job where you need to make 10 or 1,000 identical lengths of wire with a half-inch of sheathing removed from each end, you can set this so that you’re removing the exact same amount of sheath each time. It makes your work much more consistent.

The other elements here are a tensioner so that you can dial the grip up or down a bit for better results. These also include a relatively sharp cutter, and a good range of crimping options.

Now, what makes this specific model so great, in my opinion are the small details. They’re easier to squeeze, so your hand doesn’t tire out as fast.

The range of wire gauges is actually etched into the metal instead of painted on the handle. And you also get a ½-inch and ¼-inch reference etched in here for the stop block.

Now let’s compare this to a more generic option from a brand called ZOTO, though I only know that from the Amazon page.

There’s no logo on the tool or the package it came in, so I think it’s fair to expect that this is being sold under a number of different brand names. At $17, you’re not even saving a lot of money.

It’s the same idea, only the action is a little stiffer, the cutter is on the dull side, and the crimper cutouts aren’t what I’m used to. But the biggest difference is that the stripper head is really sharp. It does the job but might damage your wires.

Next up, here’s a version from Klein Tools.

These were $2 more than the Irwin, and Klein has a good reputation for quality. I was a little disappointed, though.

The action on these was the stiffest out of all of them, and I think part of that is due to this nice sharp cutter in the handle that has overlapping blades that add just a bit more friction.

They also added a feature on here that you think would be great but surprisingly isn’t. Instead of using the plastic stop block design that everyone else seems to, Klein went with a metal block. In theory, this would better and last longer, but in practice, it comes loose pretty easily and the weight of it flops down and becomes annoying.

With some pliers handy, you can really tighten it down and it will stay put, but then it can be a pain when you need to adjust it later. It’s also worth pointing out that the Klein model doesn’t include crimpers.

Next up a $15.00 option from WorkPro. These are very similar to the vise grip but five dollars less.

The differences I can see are that the cutter is a bit dull, the crimper is that less familiar design, the markings are painted on not etched, and the action is a little stiffer. It’s not the end of the world, but with the better tool only five dollars away, it seems kind of silly.

This tool actually slipped on the 10 gauge wire, and this is with it all the way tightened down. So, if you’re looking for a wire stripper to use with larger gauge wire, skip this option.

Finally for this type, here’s an option from Gardner Bender at $22.

There’s no stop block and no tension adjustment. The cutter has a decent edge to it but overall I have no reason to recommend this one.

Now, that self-adjusting design pops up everywhere, but it’s not the only game in town — you’ll also see an option like this:

This style is cheap but effective, I picked these up for $14. The action comes down like two sets of teeth – the front teeth hold the wire down while the back teeth bite into the sheathing and pull it away. There’s a dial on the back that adjusts the force of the back teeth, and you also get a stop block adjustment for the length you want to remove.

There’s also a cutter in the handle, though it’s not my favorite because it moves around and isn’t very accurate. But at $14, these are better than you’d think they’d be. They have a nice easy action – the downside is that the way they separate the sheathing is less delicate and leads to some wire damage, especially on a smaller gauge wire.

It’s not really self-adjusting because you need to place your wire in the right cut out for your gauge, but what makes these great is that the die for the blades is perfectly sized to cut a precise amount of sheathing away from the wire in every direction.

The downside is that you can really only fit a limited range of gauges in this design. This one by Ideal Industries goes from 26 to 16 and this one from grizzly honestly I can’t even read what the gauges are but it’s generally a larger set of wire gauges

You could probably swap out the die if you had to, but it seems like an unnecessary hassle. The other downside is that these tools can rust up in a way that makes them practically unusable. With all of that said, it is a satisfying tool to use, it does a clean job, and it’s smaller than the bigger self adjusting options and easier to squeeze.

Watch Each Wire Stripper Demonstrated on 10 and 24 Gauge Wire

I still think the manual Hakko wire strippers are the way to go for any one-off electronic work. For everything else, I think Irwin’s self-adjusting wire stripper is the best balance of price and quality, and it works with a wide range of wire gauges.

How To Wire 220v from Breaker to Outlet Step-by-Step

The Racecar Twist ~ How To Join Wires Reliably Without Solder

April 26, 2019 Roadkill Customs How To & DIY
A quick tech tip for joining two wires together. The advantages of this over crimping or soldering are speed, reliability, and flexibility. [More…]

February 23, 2019 Roadkill Customs How To & DIY
From The Driveway Engineer: Relays Made Simple ~ How to wire your fuel pump and fans, plus how to enable fans in HP Tuners. [More…]