If you are a car fanatic, then you probably already know about all the hype in the 1950’s and ’60’s with the Hemi engine. Many people love the power that was created with the advent of this engine. Even though the Hemi engine is rare today because of increases in automobile and engine technology, it will always be revered as an icon in the automotive industry.

One of the main benefits of the Hemi engine is the design of the combustion chamber. The rounded chamber was significantly more efficient than the flat head engine model. In fact, the Hemi engine was so efficient that it was capable of producing even more horsepower than regular vehicles on the market during that time.

The flat head engine is basically a flatly-designed engine that is inexpensive to manufacture. On the other hand, the Hemi engine is a large engine that actually makes efficient use of not only the combustion chamber, but also increases thermal energy use.


The Hemi engine’s combustion chamber was actually a hemispherical shape, hence the name. Because there is less surface area on the top of the engine, there is less of a chance that the engine will lose heat, which would decrease the engine’s performance. However, the flat head engines that have a simple design with a hole cut out in the middle to fit a spark plug is perfect for traditional lawnmowers simply because, as mentioned, they are easy to manufacture and easy to maintain.

The Start of the HEMI Engine 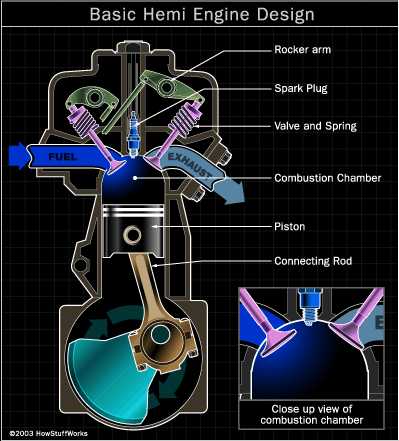 You may be wondering when the Hemi engine started production and in which vehicles they were originally manufactured in, although if you are a car buff than you probably already know. But Harry Westlake and Chrysler were the first ones to introduce the Hemi engine and Chrysler placed this engine into their Jaguars.

In fact, the V-8 version of the Jaguar in the early 1950’s was capable of producing 180 horsepower. This was not only a milestone for the automobile industry, but that amount of power was practically unheard of during that time period.

There has also recently been a release of the Hemi engine in a Dodge vehicle. The Dodge Magnum in 2003 was released with Hemi engine heads that deliver more than 340 horsepower to the engine.

This 5.7 liter V-8 makes use of the famous hemispherical heads. The Dodge Magnum also uses two spark plugs for each cylinder, which also increases the engine’s performance.

All in all, the Hemi engine has long been a popular engine for automobiles and it is a symbol of one of the revolutions in the automobile industry that came about in the mid-1900’s. The model and theory of the Hemi engine is still used today, but with even more power than before!

With the many advantages of the Hemi engine, it would seem like everyone should use it. Yet, that isn’t the case. Why? It has several disadvantages.

First, let’s talk about the many advantages. Hemis, by design, do a better job of burning all the fuel in the cylinder. Also, because of its design versus a flat head, the surface area is smaller and that means less heat escapes, plus peak pressure can be higher.

Also advantageous, is the size of the valves. With the Hemi engine placing the valves at the opposite sides of the head, there is more room for valves. This was better than the previous wedge-shaped engines with their combustion chambers in line with each other. The inline arrangement limits valve size. With the Hemi, the valves can be large and this leads to improved airflow throughout the engine.

The cons? Simply put, other engine designs have gotten better over time. While the valve size is an advantage, it is limited to having four valves per cylinder. This truth is that four slightly smaller valves per cylinder let the engine breathe easier than two large valves. Many new engines have a pentroof design to accommodate for more valve.

Also, working against the Hemi, is the current desire to have smaller combustion chambers. The smaller chamber reduces heat loss during combustion and also helps shorten the rod travel time.

While these other advancements have their pros and cons as well, the Hemi engine is renowned for its reliability and impressive power output through its hemispherical design. While the new Hemis don’t have the same hemispherical shape that its predecessors had, it still relies on that shape to deliver its power.

ICON Derelicts: A Romantic Marriage of Old and New

October 17, 2018 Roadkill Customs Rides & Roadkillers
Go behind the scenes of ICON, a company in southern California that marries old cars and new technology in a truly unique way. Then, get behind the wheel of owner Jonathan Ward’s 1952 Chrysler Town [More…]

May 23, 2016 Roadkill Customs Automotive Basics
Deep in the engine compartment, you find the heart of the brake system, the master cylinder. The master cylinder is a hydraulic pump that supplies hydraulic fluid under pressure to each of the wheels. Anything affecting the braking system of a vehicle is of utmost importance to the safety of the passengers. [More…]

How to Notch Tubes Without a Tube Notcher

May 22, 2018 Roadkill Customs DIY Projects, How To & DIY, Metalworking Basics
This is an easy to follow video that demonstrates how to accurately measure and notch tubes without the use of a tube notcher. Learn and practice this technique if you ever plan to build anything [More…]