“The Bug” is a flathead Ford V8-powered 1927 Model T built and driven by hot rod icon Dick Kraft — stripped to the bare frame rails and running essentials, in 1950, The Bug had become the “daddy” of modern dragsters.

Kraft got his first car when he was 14. He was 16 in 1937 when he began to build his reputation as one of the most competitive street racers around.

For the first time, guys like Kraft could race legally on a paved track with the police watching the action rather than chasing it.

With this fledgling sport came a different kind of race car. Running for top speed at the lake beds (as Kraft was at the time) was one thing; you had miles to do it. But drag racing consisted of just a quarter of a mile; top speed mattered, but acceleration mattered more. As a result, vehicle weight became a big factor.

The Bug had to earn its keep on Dick’s parents’ orange grove as a weed-sprayer. Dick commandeered what was left of the ’27 T frame and made a race car out of it. The weed-sprayer ran a number of times at Santa Ana with both a roadster body and a coupe body before it was stripped to the bone. 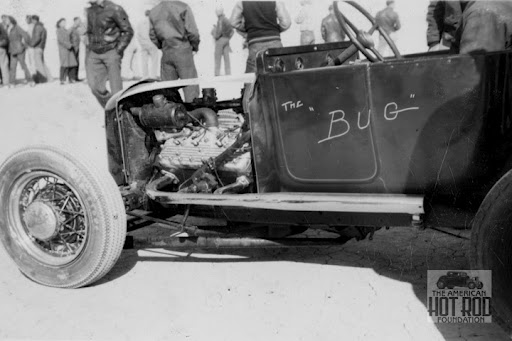 The car must have been as scary as it looks in the photos; no roll cage, no front brakes, and the seat was simply two pieces of wood (or later on, a B-17 bomber seat). Safety equipment consisted of, ironically, a seatbelt and goggles. 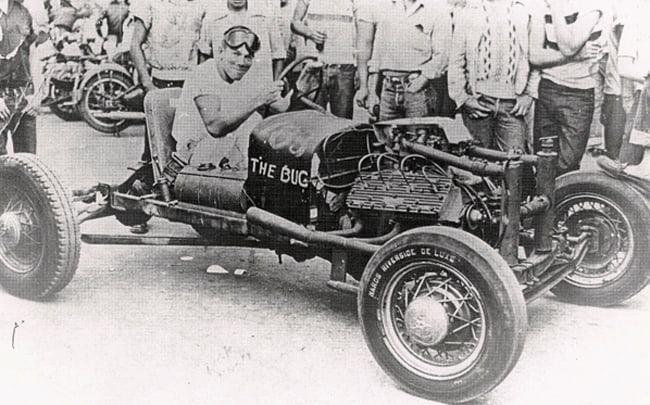 The fuel tank was an old pesticide sprayer that Kraft would pump up to pressurize it; this ensured that the carbs were fed the mixture of alcohol and (supposedly) nitro under acceleration.

The contraption weighed less than 1,200 lbs and the nickname was brought on because of the light weight and the fact that the pesticide jug was being used as the fuel tank.

Except for the hubcaps, only the bare essentials were tolerable on what was to become one of the first dragsters. For example, the sheet of aluminium over the Strombergs prevented some of the 30% nitro from splashing back on Dick’s face.

It didn’t take long for word of Kraft’s success to spread, and pretty soon everyone was building open-wheel “rail jobs” like The Bug. As you’d expect, the style quickly spread to the street, and the popular T-Bucket movement was born. Today, T-Buckets stand nationwide as the quintessential hot rod, thanks mostly to a fellow named Norm Grabowski.

February 26, 2019 Roadkill Customs Builds and Examples
This roadster sounds amazing, goes hard and turns heads wherever it goes. People tend to be drawn to it like a magnet. [More…]