Jim Clark, Hot Rod M.D. — The process that can be used to address a condition called drive-shaft/universal joint cancellation, often referred to as adjusting pinion angle.  This process can be used to eliminate the vibration and premature wear caused by improper orientation and phasing of the drive-shaft.

This condition is caused because every U-joint that operates at an angle creates a vibration.  It creates that vibration because the U-joint cross rotates with the shaft in a circular motion while also moving from front to rear.  That rocking back and forth motion as it rotates causes the cross in the U-joint to accelerate and decelerate.

If you could view this as rotating around the face of a clock with the cross rotating in a counterclockwise motion it would show the U-joint when at a horizontal position (3 to 9 o’clock) as traveling in a circular motion.

As the yoke arm at 3 o’clock travels counterclockwise towards 12 o’clock and tips to the rear of the vehicle it accelerates.

Finally completing one rotation as it travels counterclockwise from 6 o’clock to 3 o’clock decelerating as it returns to center.

Because the U-joint is connected to the driveshaft and accelerates/decelerates through this full rotation, the driveshaft speeds up and slows down during each revolution.  This creates what is called excitation torque.

To cancel this excitation torque, the U-joint at the other end of the shaft needs to rotate at an equal but opposite angle in relation to the U-joint up front.  By using U-joints in pairs and in phase, and the angle between the driveshaft and the equipment at both ends is the same, the acceleration/deceleration cycles tend to cancel each other.

These U-joint angles should always be at least 1-degree to avoid wearing out the yoke bearings. 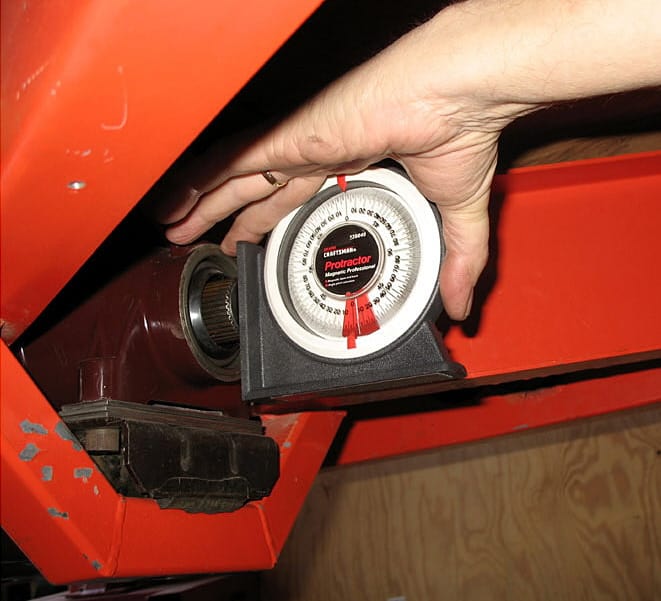 The next step is to measure the rear-end pinion shaft angle. It should be pointing upward towards the front with the vehicle sitting at ride height on a level surface.  At least 1-degree and ideally not more than 3-degrees up.  You can alter the rear end pinion shaft angle by inserting or removing wedge shaped shims under the rear spring mounts or by adjusting the length of the control arms positioning the rear end.  See photo below… 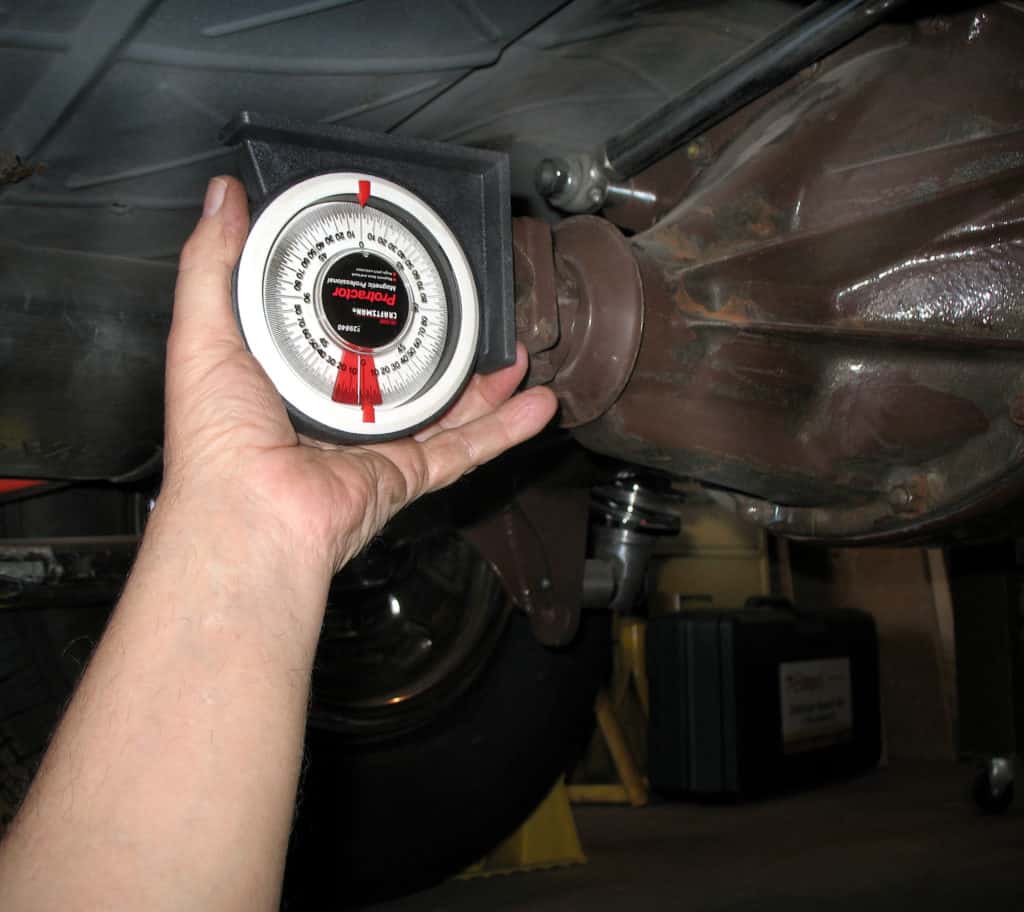 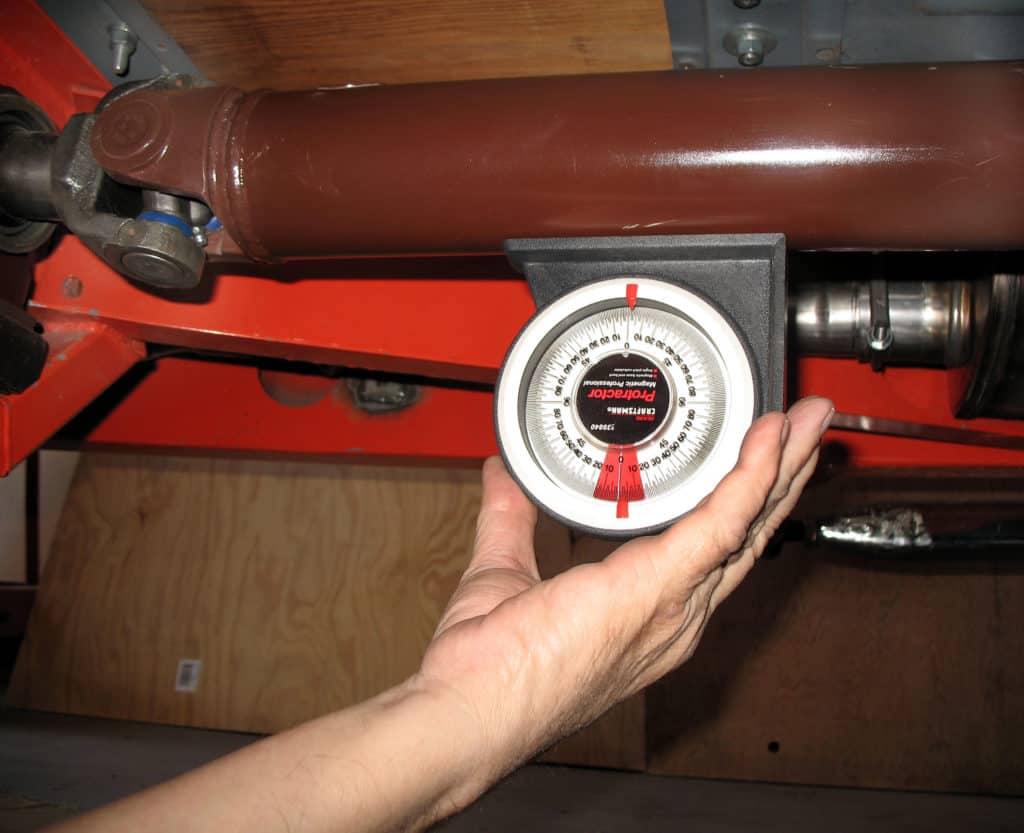 Checking to see if you have got it correct:

If there is no vibration under normal operating conditions then the angles are correct.

If the vibration steadily increases with driveshaft speed (either accelerating or decelerating) the symptom is primarily the result of a driveshaft imbalance or yoke run-out.  Sometimes this yoke run-out problem can be improved by rotating the U-joint 180-degrees in the rear end differential yoke.

To determine whether it is the output of the transmission or the pinion in the differential, change gears when the noise occurs and maintain speed.  If the vibration/noise changes in frequency, the source is in the transmission or engine.  If the frequency remains the same it is a driveshaft problem.

February 18, 2020 Roadkill Customs Builds and Examples
Lance & Wyatt bring a new project into the shop, but not just any project, this ol’ ’52 GMC 3100 is getting a makeover… [More…]

September 9, 2007 Roadkill Customs Hot Rod Lifestyle, Ideas
Doodlebug is the colloquial name for a home-made tractor made during World War II when production tractors were in short supply. [More…]

March 12, 2018 Roadkill Customs Automotive Basics
Torque converters are a type of fluid coupling which transfers rotating power from a prime mover, like an internal combustion engine, to a rotating driven load. In a vehicle with an automatic transmission, the torque converter connects the power source from the load. [More…]