When your big engine and TH400’s lack of overdrive has your engine screaming on the highway, a 4L80E transmission might just be the answer.

The 4L80E transmission’s roots trace back to the Turbo-Hydramatic 400 automatic transmission introduced in 1964 Cadillac and Buick models. The 4L80E is a four-speed transmission with electronically shifted overdrive based on the three-speed TH400. Upon release of the 4L80E ,GM retroactively called the TH400 the “3L80”.

The 4L80E and its 4L85E derivative (the 4L85E was designed for vehicles up to 16,500 lbs. GVWR and with engines up to 460 ft. lbs. of torque and towing capacity was up-rated to 22,000 lbs) are excellent candidates for heavy, powerful vehicles in need of an overdrive transmission. The 4L80E is strong, versatile and available — and for this reason, the aftermarket now offers many retrofit kits to put these capable transmissions in all kinds of vehicles, new and old, and even behind non-GM engines.

To differentiate between the two, take a look at the bellhousing:

In addition to the bolt hole differences, the ’97-and-later transmissions use a center-lube design, so the ATF cooler lines are mounted inline on the transmission (front to rear) versus the stacked fittings (vertically) used on ’91–’96 units, which won’t matter much if you’re running your own cooler lines anyway.

Complexity and Cost: The 4L80E electronic transmission controller (and wiring) presents additional complexity and cost over automatics like a 700-R4 or Turbo 400.

Dimensions: The 4L80E’s case is 11/2 inches longer than the Turbo 400. It also uses an integral bellhousing with the Chevrolet V8 bolt pattern. The aftermarket has taken care of the bellhousing, although the extra case length could mean floorpan clearance issues, especially in smaller cars.

Use in Older Vehicles: The 4L80E transmission uses an electronic vehicle speed sensor (VSS) rather than a speedometer cable — mechanical speedometer tail-shaft conversions are available from the aftermarket.

Where To Find a 4L80E Transmission / Vehicle Donor

You can find the 4L80E transmission in ’91-and-later heavy-duty Chevrolet and GMC trucks and SUVs that use big-block, diesel, or LS-based engines that are 6.0L and larger.

The 4L80 nomenclature denotes that the transmission is a 4-Speed, Longitudinally mounted, and for 8000 lbs. vehicle weights. It’s RPO code is “MT1” and has been domestically manufactured in GM’s Ypsilanti and Willow Run plants.

The case is die cast aluminum. 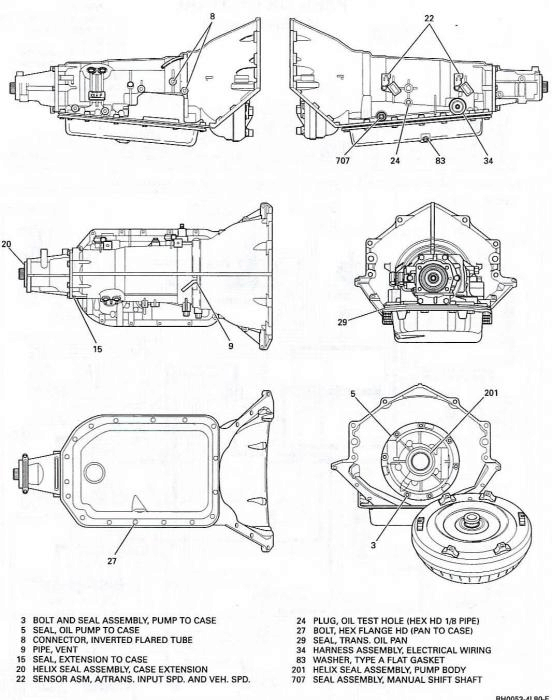 The 4L80 features ratios in each gear as follows:

In 2006, GM superceded Dexron III as the recommended fill with Dexron VI, which is backwards compatible with the earlier versions. The transmission typically accepts a 6.3 quart fill. It features a dry weight of 254 lbs. and can weight up to ~268 lbs. full.

August 31, 2019 Roadkill Customs Builds and Examples
This 1968 Pontiac GTO was built by the crew at MetalWorks Classic Auto Restoration in Eugene, Oregon as their personal shop car. [More…]