Search by Vehicle Make and Model

The 700R4 is a 4 speed automatic transmission, with a 30% overdrive in 4th gear. This transmission was produced by General Motors, but is also sometimes known by the name Hydramatic.

The development of this transmission was primarily targeted to improve fuel economy, and this was accomplished by a number of modifications, not the least of which was the 30% overdrive capability.

The 700R4 was used widely on both truck platforms and rear-wheel drive car platforms. Some of the popular trucks it was used in were the Chevrolet Blazer and Suburban and the Oldsmobile 350 diesel. This transmission was also used in the Chevrolet Camaro, Corvette, Impala, and many others.

The 700R4 was first introduced in 1982, and served as a replacement to the TH350, which was a 3 speed automatic transmission. As is expected with all new system, especially with such a major re-design, some design issues were present with the original release.

There was constant improvement, and by 1987 this transmission was much more robust and reliable. There was a name change to 4L60 that occurred in 1990, although this was essentially the same transmission.

In 1993 the transmission became electronically controlled, instead of hydraulically, and the name became 4L60E.

For the purposes of this article, the focus will be pre-electronic control. At this time, all of the regular 700R4, or 4L60 transmissions began to be phased out, and none are available in that format any longer.

This transmission was very popular and considered one of the best of ever produced. Two of the key reasons for its popularity were the improved fuel consumption and the 3.06:1 gear ratio in 1st gear. This is a much lower ratio than what was common, and provides good acceleration from a stop and is also good for off-road driving.

As mentioned, the 700R4 was a 4 speed automatic transmission. When the transmission was renamed to 4L60 in 1990, this naming convention provided a number of key characteristics about this transmission.

The amount of torque that this can handle will vary based on year of production, but one website states that the max engine torque is 350 lb-ft with a max gearbox torque of 650 lb-ft.

The 700R4, produced by General Motors/Hydramatic, is considered one of the best overdrive transmissions ever made. This transmission was introduced in 1982 as a replacement for the TH350 transmission, with the primary goal of improving fuel economy.

This transmission had a lower first gear ratio, which was good for performance at low vehicle speeds, while the 30% overdrive provided significant fuel economy improvement.

The name changed in 1990 to 4L60, while the most significant change came in 1993 when the electronically controlled transmissions were introduced. This was essentially the end of the 700R4, or 4L60, as we knew it. 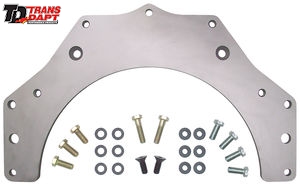