Both the Otto cycle (which is a four stroke cycle that is most commonly used in vehicles today) and the Diesel cycle internal combustion engines require the pistons to be moving before the ignition phase of the cycle. The engine must be set in motion by an external force before it can power itself. That’s where starters come in.

In the earlier days when automobiles were a new thing, a hand crank was used to start the engine, but this was somehow inconvenient and really hard work to crank the engine up to speed. It was also very dangerous. Although the cranks had an override mechanism to prevent it, when the engine started, a crank could begin to spin along with the crankshaft. The operator had to then pull away immediately, or they could risk breaking their wrist, or even worse than that.


The self-starter was invented in 1899. But by 1920, nearly every vehicle had a self-starter. It had replaced the hand-cranking.

There are a few different types of starters:

The modern starter motor is a direct current electric motor with a solenoid switch that is similar to a relay on it. When the low-current power from the starting battery is applied to the solenoid (this is usually through a key operated switch), it will push out a small pinion gear on the starter motor’s shaft and meshes it with the ring gear on the flywheel of the engine. The solenoid will also close high current contacts for the starter motor and it will start running.

When the engine starts up, the key operated switch is opened and a spring in the solenoid assembly will pull the pinion gear away from the ring gear, and the starter motor will then stop. In modern starter motors there is a “bendix” — which is a gear and integral freewheel, or an overrunning clutch. This will enable the flywheel to automatically disengage the pinion gear from the flywheel when the engine starts. 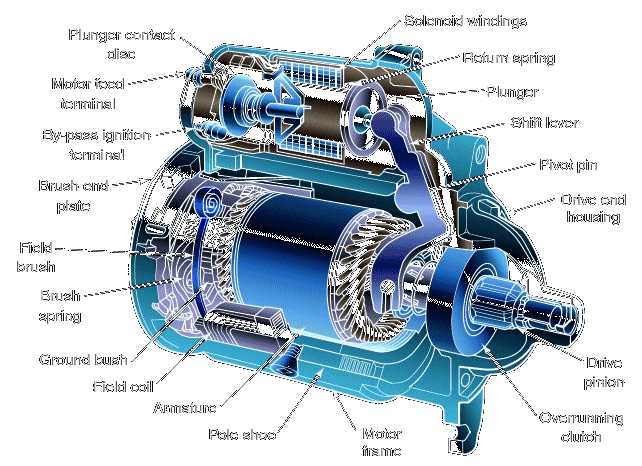 This system consists of a geared turbine, an air compressor and a pressure tank. It is particularly common on trucks, but some gas turbine engines and Diesel engines use it as well. Here, air released from the tank spins the turbine, and through a set of reduction gears it will engage the ring gear on the flywheel. This is a lot like an electric starter would. Once the engine is running, it powers the compressor to recharge the tank.

Sometimes on larger, high powered Diesel engines, there may be a small gasoline engine that is on the side as a starter. Sometimes they shared the same cooling system and oil supply. As the pony engine warmed up, it circulated warm coolant and warm oil in the diesel engine. It also made it easier to crank and it improved the service life.