The ignition system is a key component in making an engine run because it provides a way for the fuel mixture to burn. All gasoline engines require an ignition system. Most four stroke engines use mechanically timed electrical ignition systems. The heart of this system is the distributor which contains:

External to the distributor is the: 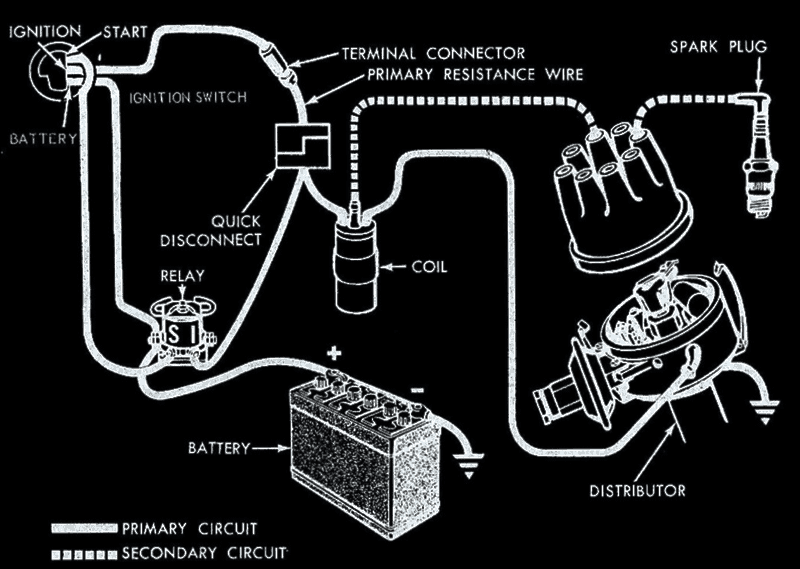 A lead-acid battery is the power source of the ignition system which is kept charged by generating electricity using an alternator. The engine operates contact breaker points, which interrupt the current flow to the ignition coil.


The sequence of the ignition firing begins with the points (or the contact breaker) closed. A current will flow from the battery, through the current limiting resistor, then through the coil primary and across the closed breaker points and the finally back to the battery. This current produces a magnetic field within the coil’s core that forms an energy reservoir. That energy will drive the ignition spark.

As the engine turns, so does the cam inside the distributor. The points will ride on the cam so that as the engine turns and reaches the top of the engine’s compression cycle, a high point in the cam will cause the breaker points to open. This will break the primary winding’s circuit and will stop the current flow through the breaker points. When there is no current flow, the magnetic field generated in the coil will immediately begin to collapse. This rapid decay of magnetic field induces a high voltage in the coil’s secondary windings.

The coil’s windings are connected to the distributor cap. A turning rotor that is located on top of the breaker cam within the distributor cap, connects the coil’s windings to one of several wires that lead to each spark plug. The, often over 1000 volts from the coil’s secondary will cause a spark to form across the gap of the spark plug. This will then ignite the compressed air fuel mixture in the engine.

August 11, 2015 Roadkill Customs Automotive Basics
It is usually a cold engine, which is exposed to extreme weather that is difficult to start. However, a hot engine can have problems too. They can be tough to start and many people don’t know how to deal with this situation when it occurs. Here are some common reason why this may be. [More…]

May 23, 2016 Roadkill Customs Automotive Basics
Deep in the engine compartment, you find the heart of the brake system, the master cylinder. The master cylinder is a hydraulic pump that supplies hydraulic fluid under pressure to each of the wheels. Anything affecting the braking system of a vehicle is of utmost importance to the safety of the passengers. [More…]

How to Use a Torque Wrench

October 11, 2016 Roadkill Customs How To & DIY, Shop Basics
Torque specifications for components (especially engine components) are not to be taken lightly. Fastener torque requirements are also changing as nuts and bolts are becoming more and more vehicle specific. There is no more running to the parts bin for a quick replacement. [More…]