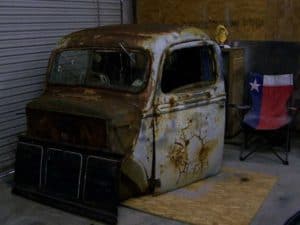 Darrik Hooper of Carthage, Texas started his project with only the cab that he bought at Pate Swap Meet in Fort Worth. He was told it was a 1940’s model when he bought it, but once he got it home, he took the time to look it over really well. He noticed all the nomenclature plates across the dash – the main plate showed the make and model: Ford G8T – 1 1/2 ton including the serial number and date of delivery: 7-7-43. “1943?” he said to himself… “This is military!” He started looking hard at the cab and could see the original olive drab paint in places. He knew right then that he had a theme and direction. These war trucks were part of the Lend-Lease Act of 1941 and served on the western front. 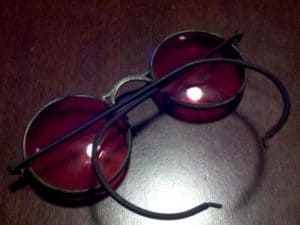 Darrik decided to chop the top four inches. Once the top was cut, he removed it and flipped it over to set it down on a couple saw horses. A pair of red lens glasses slipped out from inside the pillar post. They were clearly old and said Welch across the brim. He looked them up on-line and found that they were standard issue military driving glasses of the era. His response: “Cool!” He now keeps them hanging from the rear view mirror. How long were those lost inside the pillar?

Darrik painstakingly sanded down through the three different layers of paint that had been applied over the years to get to the original olive drab green, and what you see in these photos is 1943 original. He tells us that he is such a purist so he knew he was going to put a Ford motor in a Ford truck – so why not a bad ass 460 Ford big block, Weiand 6-71 Supercharger, heavy-duty C6 transmission and of course a Ford 9″ rear-end.


He laid out his frame for ride height and stance and used 3/16″ rectangular tubing for strength. After he sanded all the old paint off, he patina’d on some new door stars. If you look closely you can see the tips of the old one lower on the door. He cleared it afterwards to bring back some of the luster after all of the sanding. 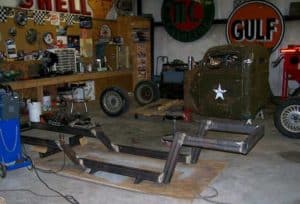 Darrik fabricated the bed and tailgate from flat stock sheet metal and procured a practice bomb from a Military Surplus Shop for use as the gas tank. He then built some jump seats and found a pair of pilot’s harnesses for the seat belts. The grill is from a 1930’s tractor. He thought it needed some machine guns so he hand-made them and mounted an authentic WWII anti-aircraft gun site on the top of the grill. 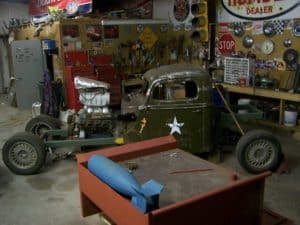 The radiator overflow is an old canteen, the shift knob an old hand grenade. He used destroyer headlights with blackout pods and old jeep tail lights. The fronts are military jeep tires, and the rears are 20″ spare tire rims from a 2010 Dodge flipped around and mounted backwards. The battery is housed inside some old ammo boxes, as well as lots of other military accents. Of them, his favorite is the lettered significant dates, battles and events from WWII on the doors. He also paid tribute to some family members and friends that served in the war and listed their battalion numbers.

Darrik built the blower motor himself and it turns out 700+ hp. All totaled, he spent about 16 months on the build. He says “I think it turned bad ass and I’m proud to show her off. I bet that truck has seen some stuff in her day. If only she could talk…”

How and Where To Score a Cheap Junkyard Engine

June 12, 2018 Roadkill Customs DIY Projects, How To & DIY, Low Budget Builds, Roadkill Muscle
For generations hot rodders have pulled bigger and more powerful engines out of other cars to use in their DIY hot rod projects. Back in the ’50s gearheads would spend hours hunting for Cadillac and Oldsmobile engines to use in their rods. In the ’60s builders started pulling Hemis, Pontiac 455s, Ford Cammers, and of course the big-block Chevys out of cars to power their gassers, T-buckets and other custom powered street machines. [More…]