Jamey Campise of Jeweled Up Junk (Facebook and Instagram) in Bakersfield, California is building a 1971 Chevrolet C10 for a customer. 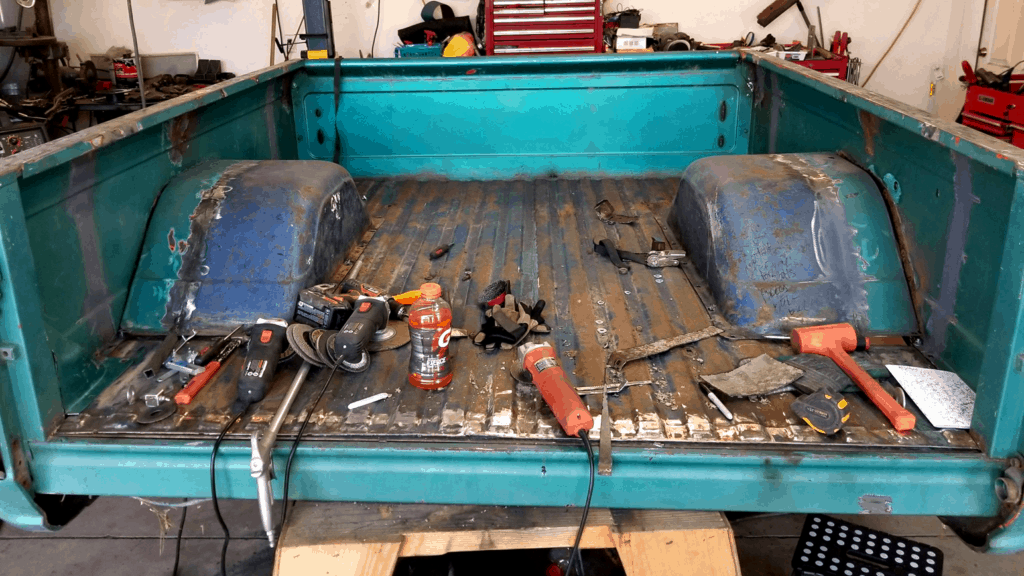 The project calls for shortening from long bed to short bed and tubbed wheel wells. Jamey’s shared some shots with us showing progress on the project…

As is common in Chevrolet C10 builds, fuel tank relocation was on the docket.

But Jamey wanted to do something other than a filler on the bed side or in the bed.

After a lot of thought, I decided that I liked the way the ’57s were setup, and decided to shoot for it. There are kits available but they’re expensive, and since this is a budget build, I need to save wherever I can.

Figuring out the hinge was Jamey’s largest challenge, but in the end, he turned to a crunched Dodge Ram bed on hand that he salvaged the fuel filler door hinge mechanism from.

Getting the right opening cut on the bottom so the light would land right led to a lot of trial and error — he trimmed and refit, moving the bezel up and down till it fit right.

I used a section of inner fender wheel wells as a cover for the hose because of the bead roll to match and followed through on the other side just to make uniform.

The current fuel filler neck and cap will be removed and a 2017 Chevrolet filler neck will be used, as this truck will also be undergoing an LS conversion.

How To Adjust the Choke and Fast Idle on Holley Carburetors

December 15, 2018 Roadkill Customs How To & DIY
From Holley Performance ~ How To Adjust the Choke and Fast Idle on Holley Carburetors with Tom Kise… [More…]
Add to Toolbox

December 5, 2017 Roadkill Customs DIY Projects, How To & DIY
Wiring Hot Rod Turn Signals – Diagram Wire hot rod lights? The one automotive job we all dread is the wiring. Yet, with help from this how-to book even the neophyte mechanic can install a [More…]
Add to Toolbox

April 19, 2019 Roadkill Customs Rides & Roadkillers
Jon saved this 1955 Chevrolet from a life on blocks to being NHRA certified drag car, able to run 8.50 in the quarter mile. [More…]
Add to Toolbox