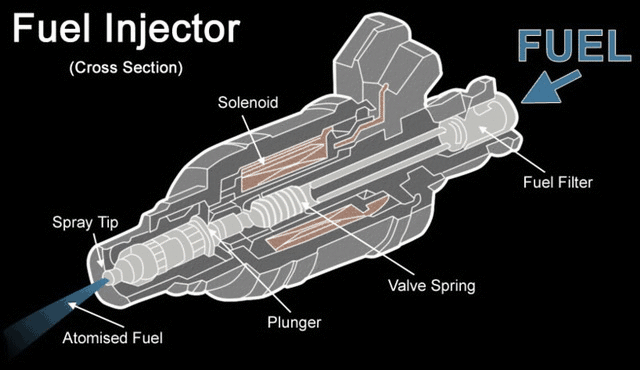 There are a few different kinds of electronic fuel injection systems:

The most advanced type of electronic fuel injection is sequential multi-port fuel injection. This will cause each injector to spray immediately before that particular injector fires. Therefore, a driver of a car with particular system will get a much quicker response when they floors the gas pedal. The reason for this is because the fuel delivery system doesn’t have to finish a whole revolution of the engine before it’s able to increase the frequency of fuel delivery.


Computers control fuel injection. Sensors send vital information to be processed back to the computer . The computer will determine when fuel spray begins, and how much fuel to deliver.

The throttle input is monitored by the throttle position sensor. The further down you push the gas pedal, the faster the engine will go. This then means that the fuel injectors must spray more frequently.
The oxygen sensor monitors the levels on unburned fuel in the exhaust. Too much unburned fuel going through will tell the computer that the engine is running too rich. This then means that the computer will tell the injectors to spray less fuel at each rotation.

Electronic fuel injection is a lot more complicated than carburetors and it requires so much more computerization, but the fuel delivery is so much more precise. Fuel injectors give cars better power and acceleration. By reprogramming the computer and increasing the fuel pressure levels it also betters the performance levels of power in your vehicle.

March 14, 2018 Roadkill Customs Builds and Examples, DIY Projects, How To & DIY
Joe Winter of Hoopie’s Hot Rods in Ohio originally planned to mount a 1946 Chevy truck body on an ’02 Prius unibody/chassis. It became clear quickly that that approach was not going to fly. After [More…]

August 11, 2015 Roadkill Customs Automotive Basics
It is usually a cold engine, which is exposed to extreme weather that is difficult to start. However, a hot engine can have problems too. [More…]

April 30, 2018 Roadkill Customs Ideas
Who doesn’t appreciate a well-executed engine swap? But sometimes it seems that even Mechanics lose their minds! Here are some of our favorite insane engine swaps… [More…]