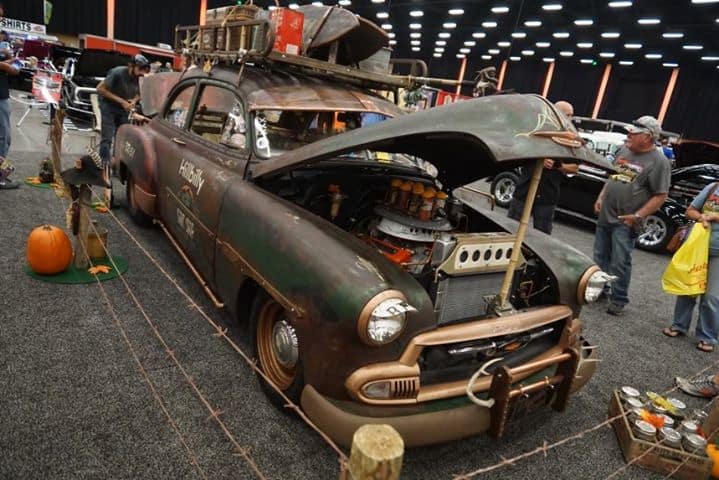 I have owned this car for over 12 years, very dependable driver, crowd favorite anywhere you take it, tons of details! Has been featured on a “My Classic Car” episode, twice on “Lokar Car Show Series”, several other publications like magazine, newspaper articles, car show advertisements, recently got a spot on a rat rod calendar, tons of awards at shows in several states.

The car has ‘79 Malibu running gear, disc brakes, tilt wheel, 350 w/ turbo 350 transmission, good tires, bubbling still in the trunk. It has a good solid body, including floorboards and trunk area, but it is a rat rod, so there is Natural Patina!

No heat or defrost, and currently no driver side door glass, could use a few updates which would allow a new owner ways to incorporate their own ideas or take it to the next level. Mostly looking for a cash sale and someone to take this cool old car around the country to places I will never get to take it!

Would make a good vehicle to promote, do parades, do shows, and draw a crowd to a business! Reason for selling: pay some bills and start on a new Gasser project!

September 27, 2019 Roadkill Customs Builds and Examples
We’re looking to get real with this build show. How real? Like, no daytime TV drama real. More like “I spent way too much money on suspension and now I have to sell some old stuff to make that money back” real. [More…]

November 4, 2019 Roadkill Customs Concept Cars & Design
To see what might be possible with this 21st-century fiberglass sports car, Hagerty asked Chip Foose for his take on the design. [More…]

Bringing an Abandoned C10 Project Back from the Dead

March 16, 2020 Mad Scientist Garage Builds and Examples
Dan is proving a dream truck can be built from a rusted out and stripped shell with a few hundred dollars and some simple tools. [More…]