Most of the energy in the gasoline is converted into heat. It is the job of cooling systems to take care of that heat. Therefore the cooling system is quite an important part of the vehicle. In fact, the cooling system on a vehicle that is driving down the freeway will dissipate enough heat to be able to heat two average-sized houses. Thus the main job of the cooling system is to keep the engine from overheating. It does this by transferring this heat to the air.

The cooling system also has some other important jobs.

The engine in your vehicle runs best at a fairly high temperature. When the engine is cold, the components will wear out faster, and the engine is less efficient and will emit more pollution. Therefore, the job of the cooling system here is to allow the engine to heat up as quickly as possible, and then to keep the engine at a constant temperature.

Fuel is constantly burning inside your vehicle’s engine, and a lot of heat from this combustion goes right out the exhaust system. But, some of it will soak into the engine and heat it up.


The engine runs best when the coolant is about 200 deg F. It is at this temperature that:

You will find that vehicles have two kinds of cooling systems:

In a liquid cooled cooling system, the vehicle circulates a fluid through pipes and passageways in the engine. As this liquid passes through the hot engine it will absorb heat, and this then cools the engine. When the fluid leaves the engine, it will pass through a exchanger, or radiator, which will transfer the heat from the fluid to the air blowing through the exchanger. 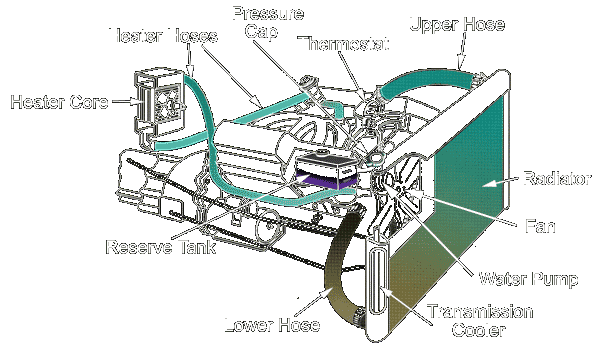 Air cooling systems are not often found in many modern vehicles. Instead of circulating fluid through the engine, the engine block is covered in aluminum fins that conduct the heat away from the cylinder. A powerful fan will then force the air over the fins, which then cools the engine by transferring the heat to the air.

April 29, 2016 Roadkill Customs Automotive Basics
To understand the principle behind a brake booster, it is important to understand how a basic brake system works. No one would disagree that brakes are essential to the vehicle and safety of the passengers. Most of us haven’t placed much thought behind how it is that our cars stop. [More…]

How to Tint a Back Window on a Classic Truck

June 13, 2018 Roadkill Customs DIY Projects, How To & DIY
Automotive window film (often called window tint) can not only reduce heat and glare in your vehicle, it can also protect you from damaging rays from the sun. Not only does window film protect you [More…]