Based on a 1977 Ford F-150, the Ken Block’s 914-HP Hoonitruck makes its massive 914 hp and 702 lb-ft of torque thanks to a custom-tuned V6 EcoBoost turbo motor taken straight from the Ford GT Le Mans development program. 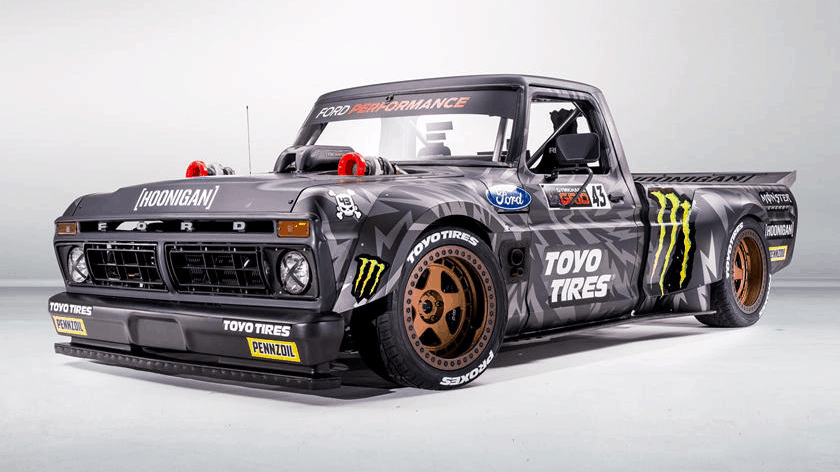 A Sadev six-speed transmission sends the power to all four wheels and the chassis, bodywork and fabrication were all taken care of by Detroit Speed.

Ken Block and his team were responsible for the design and styling elements.

“This project has been in the works for about 2 years,” said Block. “I’m beyond pleased with how it turned out, it’s simply one of the most badass and unique vehicles I’ve seen in a long time and I think it compliments my Hoonicorn perfectly. It’s also crazy to be throwing something around that’s this size when doing Gymkhana-style driving. But, it looks absolutely wild on camera, and that was our goal from the start. I can’t wait for the fans to be able to see it in action, I think they’re gonna love it!”

The Hoonitruck will be on display at SEMA 2018 in Las Vegas and will be featured in the upcoming Gymkhana Ten video from Amazon Prime on December 7, 2018 — The video will be available globally on Ken Block’s YouTube Channel ten days later.

November 26, 2018 Roadkill Customs How To & DIY, Welding Basics
In this video, Cody shows the camera guy, Joe, the basics of TIG welding and how exactly to get started! [More…]

How To Install Ring and Pinion Gears in a Ford 8.8 Rear-End

November 26, 2018 Roadkill Customs How To & DIY
In this video DIY Guide, The Fab Forums go over how to install ring and pinion gears in a Ford 8.8 rear end. [More…]