All of these methods are pretty obvious and don’t really match the look I’m going for so I decided to “sweep” the front frame rails. This method has become more popular over the years as it allows you to lower the front a little more and gives the frame a nice curvy appearance similar to that of the Ford frames a few years newer.

This isn’t the only way to lower the front more, just how I chose to do it on this build. 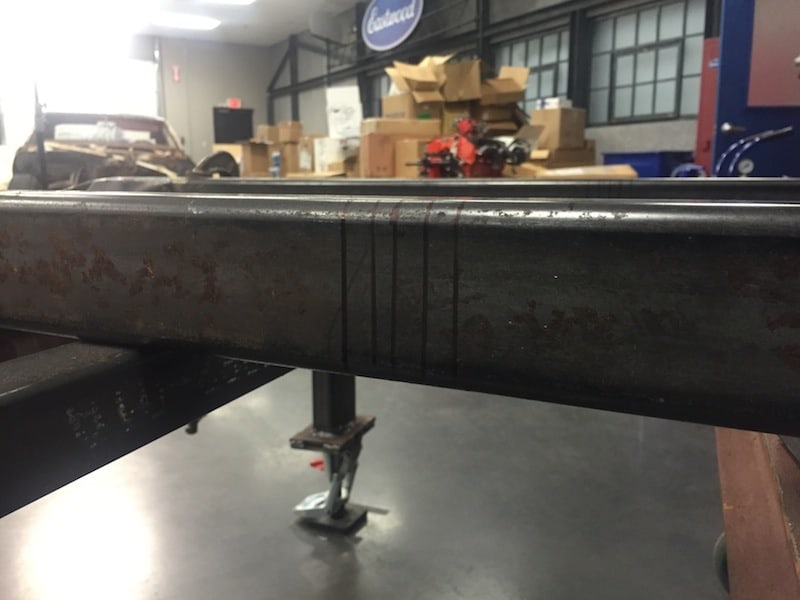 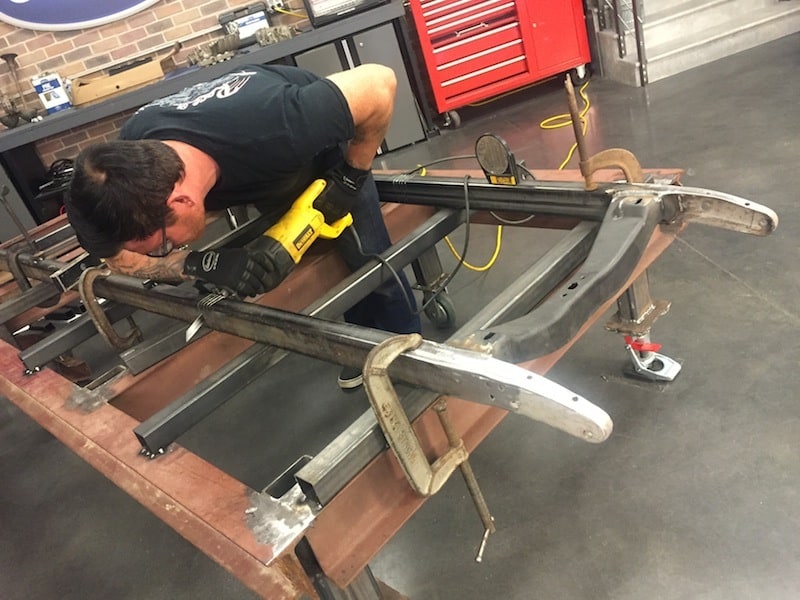 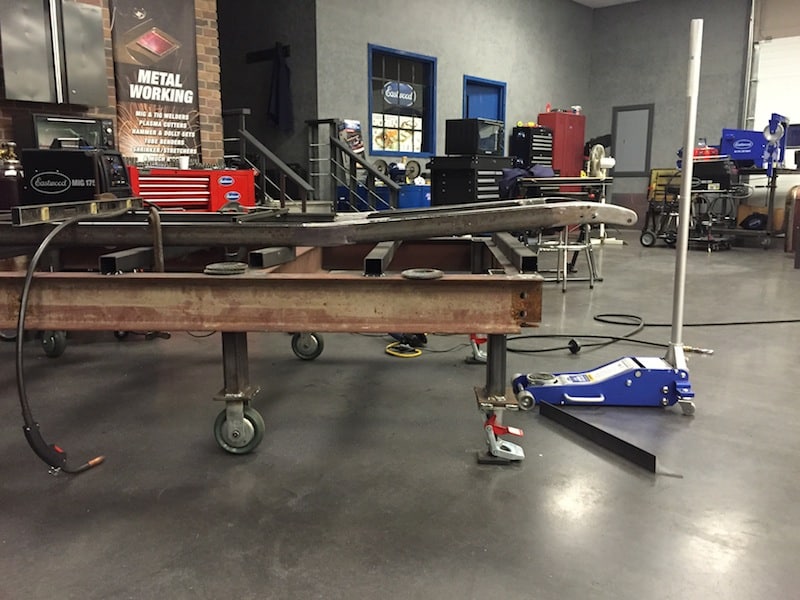 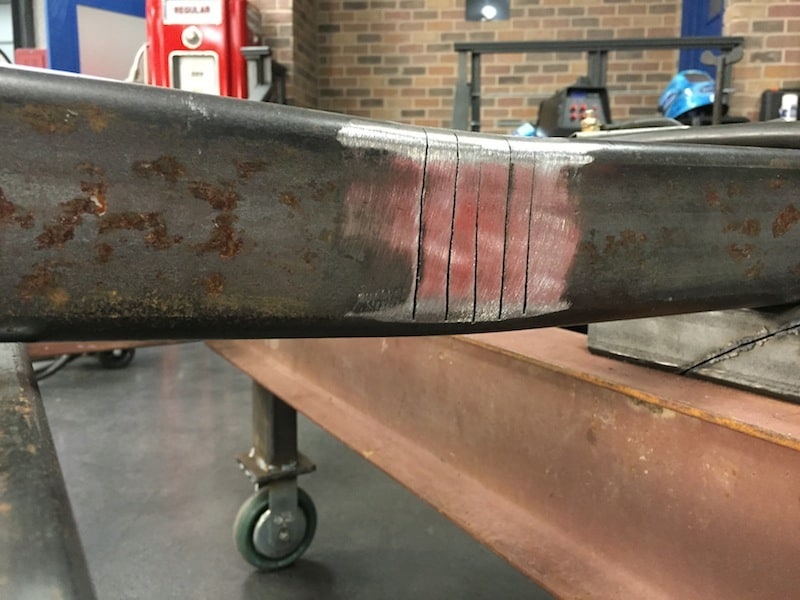 There’s a couple ways to do this, one of which is to take a pie cut out of the top of the frame just in front of the firewall to bring the frame up all in one spot and weld. I wanted to accentuate the sweep so I decided to space a number of thin slices across the top of the frame.

I made these slices close together at first and spread the last few apart more. I used a reciprocating saw to make clean, thin cuts. The key is to cut three of the four sides of the frame so it can flex. Once I had the cuts all made I pulled up on the frame to close up the gaps of the cuts.

This resulted in sweeping the frame up about 5 degrees. I used an angle finder on the frame to set the upward sweep the same on each frame rail. I then beveled each of the seams for proper weld penetration and tack welded each of the cuts to hold the frame in that position. 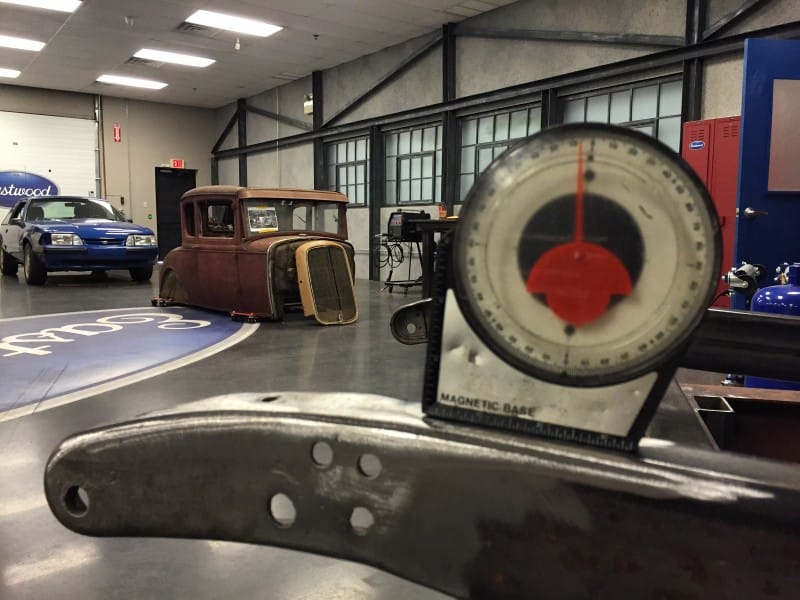 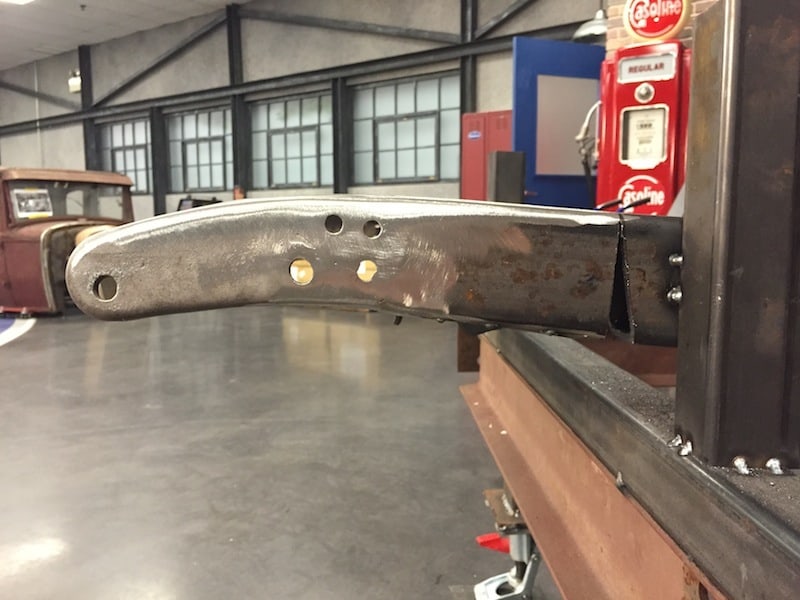 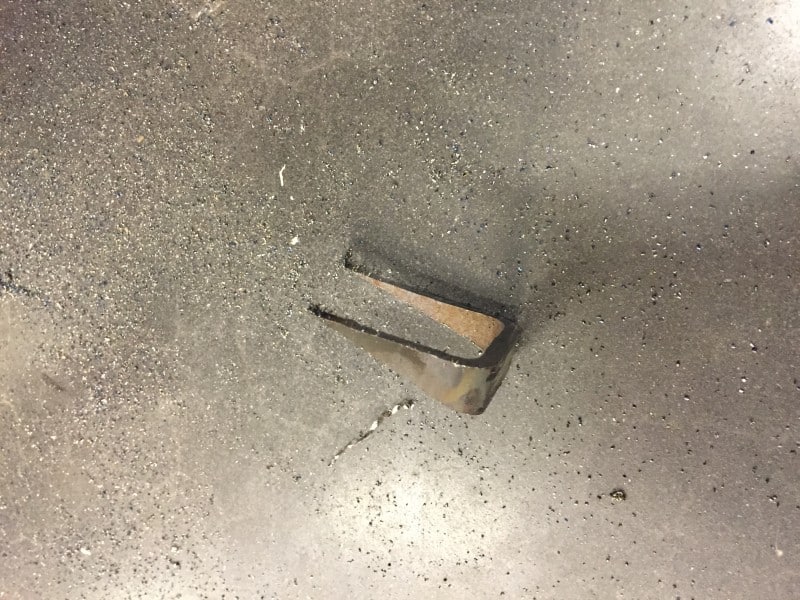 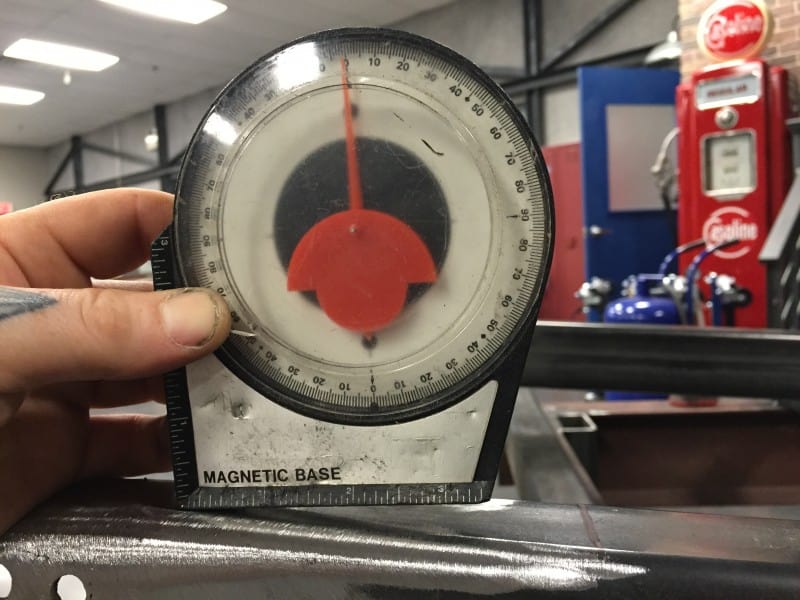 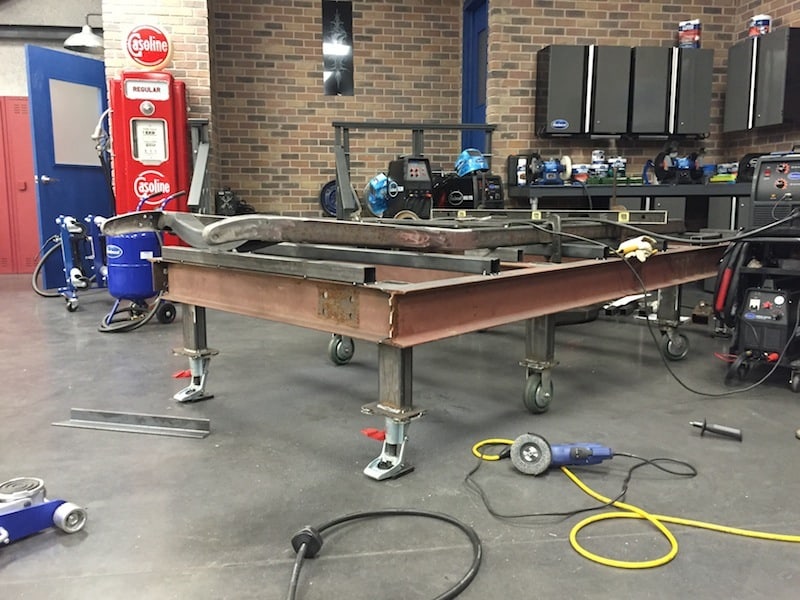 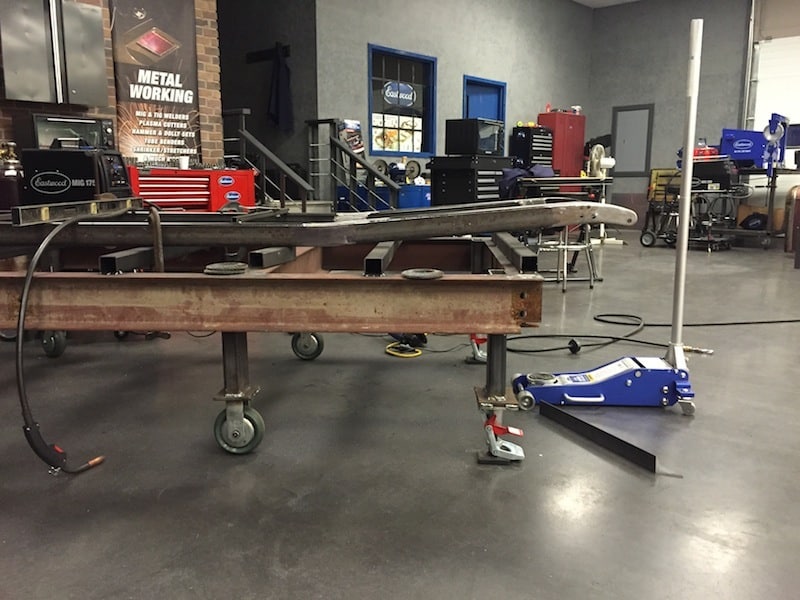 If the frame was left swept up just like this it would throw the alignment of the car all out of wack, so we need to take that 5 degree angle out at the front axle. In the first picture you can see the 5 degree sweep the frame has currently. I first added some upright braces to the front of the chassis table and tack welded the side of the rails to the uprights so when I was pushing down on the frame it stayed true.

I then beveled the seams and tack welded them in place. Finally I double checked all of the angles were even and welded all of the seams with the MIG 175. The result gives the frame a nice flow while sweeping up to lower the front ride height. 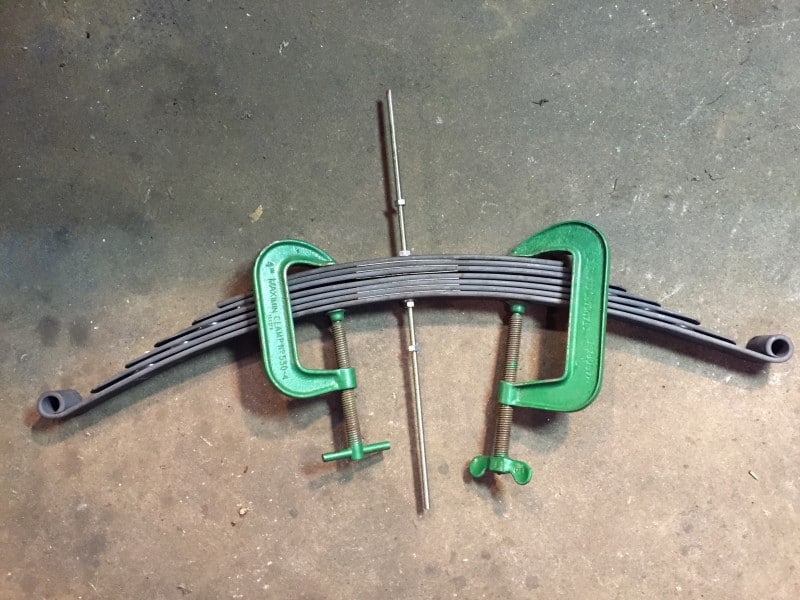 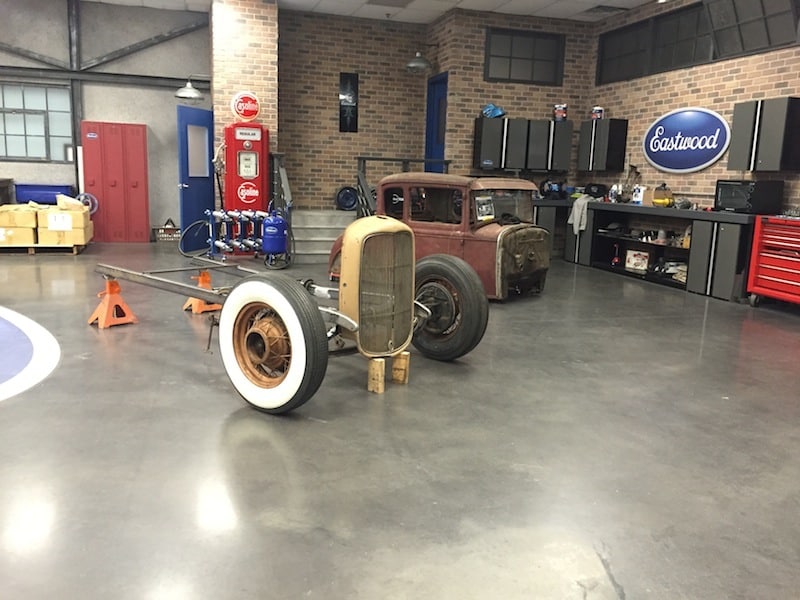 With the frame sweep finished in the front we were ready to pull the front half of the chassis off of the table to start mocking up the rear ride height, wheel base, and body channel to set the stance.

December 11, 2018 Roadkill Customs Car Shows & Events
Of course Mooneyes Xmas Party wouldn’t be complete without the drag races! A/FX, gassers, traditional hot rods, and muscle cars challenged each other to see who could run the 1/8th mile down the drag strip… [More…]

May 20, 2020 Roadkill Customs Rides & Roadkillers
For years, Tom Cotter’s 1939 Ford Woodie wagon has played a pivotal role in Hagerty’s popular Barn Find Hunter video series. Here is a deep dive into the story and memories of one of Tom’s most cherished cars… [More…]

August 28, 2018 Roadkill Customs How To & DIY
By Jay Kopycinski — There was a time when many hot rod enthusiasts were afraid of electronic fuel injection (EFI) on engines, preferring the “relative simplicity” of a carbureted engine that could be run in a [More…]