Now that my cross member could slide in and out of the rails we were ready to start setting the width of the frame and also get some measurements laid out we’d be using throughout the build. Since I’m using a factory Model A cross member I could just push the rails together so they sandwiched the front cross member and we were on the money for the frame width at the cross member.

From there we needed to angle the rails outward as the frame gets wider in the rear. 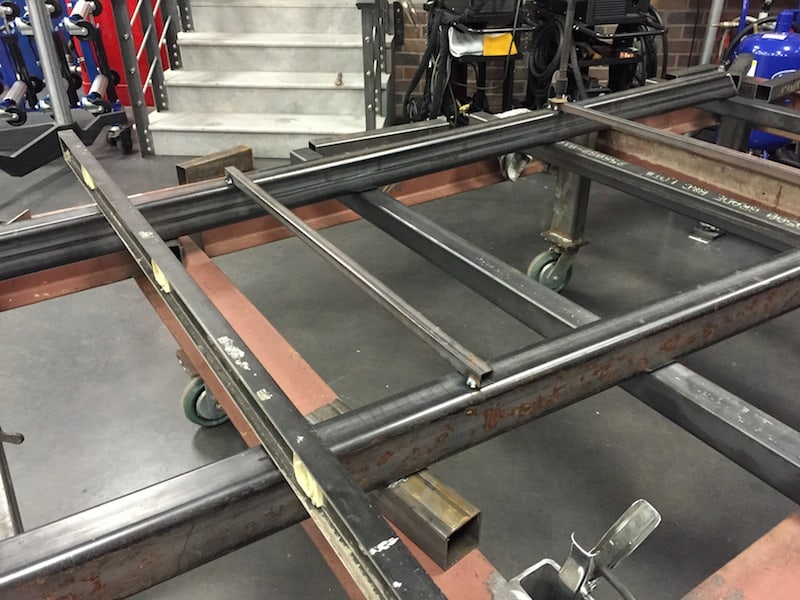 The important part for me here was to hit the factory width of the rails at the cowl so it slipped down tightly over them when I channeled the body. A factory frame sort of “kinks” out even further after the firewall and again at the B-pillar. Since I’m channeling the car I wanted my frame rails to sit inboard of the inner “rocker” area of the frame more than stock so I didn’t have to cut them out of the body. Because of this I left the frame rails continue to naturally angle out from the factory frame width at the cowl. Once the rails were squared up and I was happy with the measurements, I clamped the rails down to the table and added bracing to keep the rails fixed at the width I wanted so I could fine tune everything. 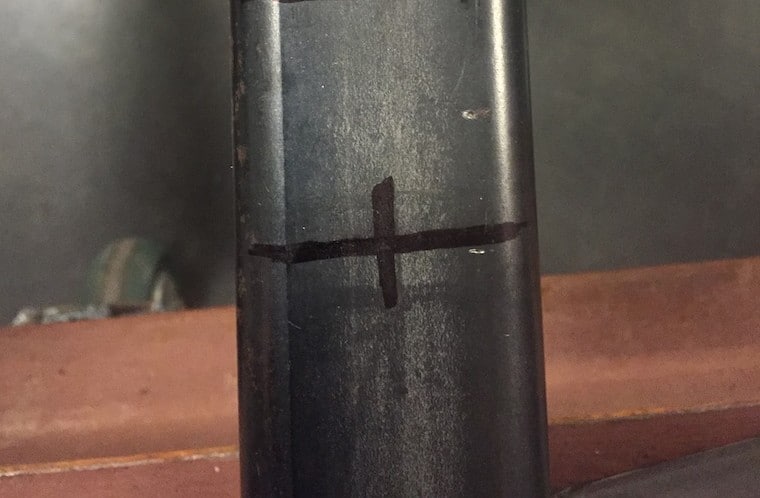 I again checked my frame rails were square with each other and the width was correct and measured out the engine bay spacing. In this case that is determined by the distance from the center of the front cross member to the firewall. Since I’m running a Flathead V8 I decided to make this area the same as a 1932 Ford V8 which is larger than a Model A. If you’re running a factory hood you will be fixed to the factory dimensions, but since I’m only running a Deuce (’32 Ford) grill that wasn’t an issue.

I marked and scribed the center lines for the firewall measurements on both sides as these would be a data line we’d use throughout the build. As silly as it may sound, these first measurements are probably the most important part of your chassis build. Just about everything you do until the car is built will be referenced off of those lines. If they’re off EVERYTHING you do will be crooked or off. Double, Triple, and Quadruple check that those suckers are dead-on! 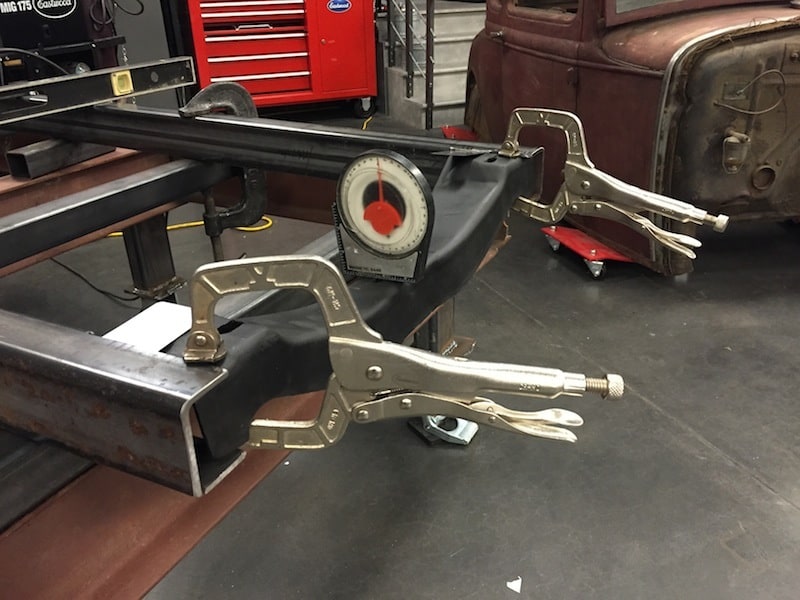 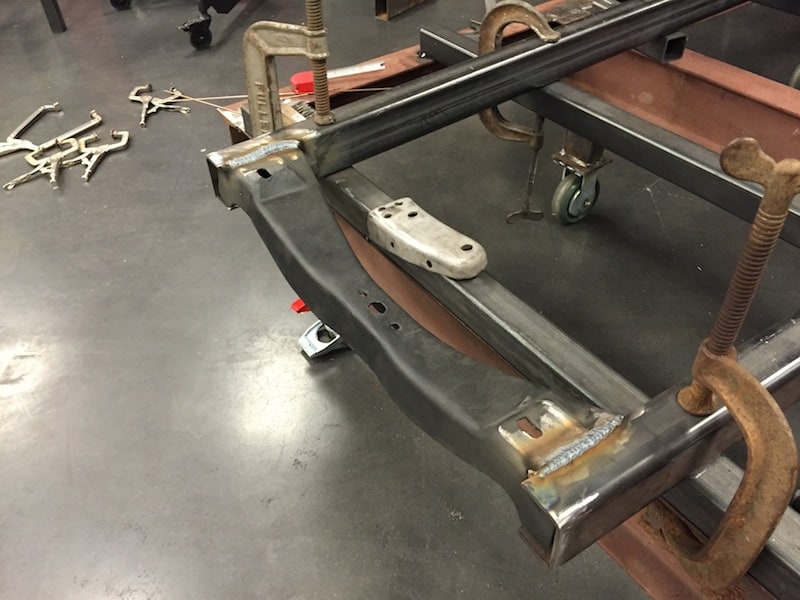 I then clamped the cross member in place so that it was sitting with 5 degrees of caster. Ideally you should put some initial caster in here so you’re not trying to pull it all out with the wishbone angle (which also sets caster).

I again checked my measurements by measuring diagonally from the corners of the same hole on the cross member on each side and the firewall data lines we set already. Really make sure you dial this in before welding! I then welded the cross member in with the MIG 175 and we had a base to build our front suspension off of. 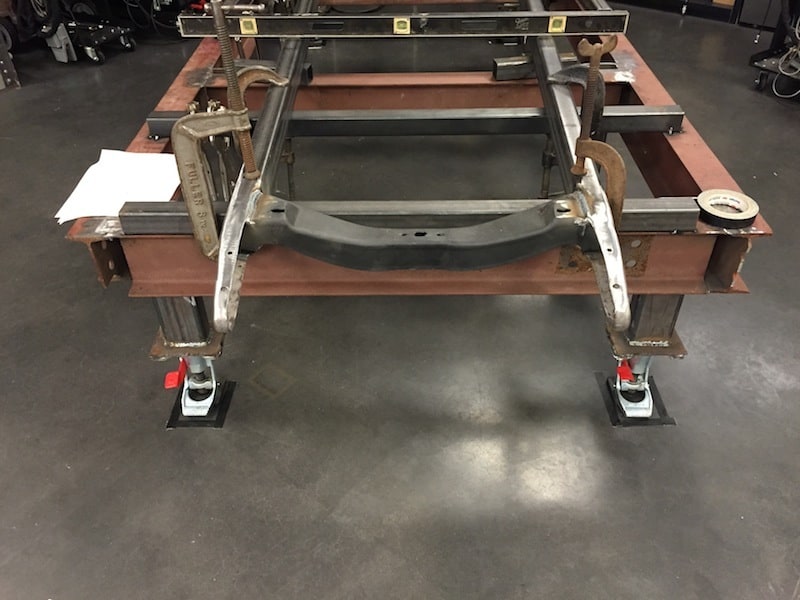 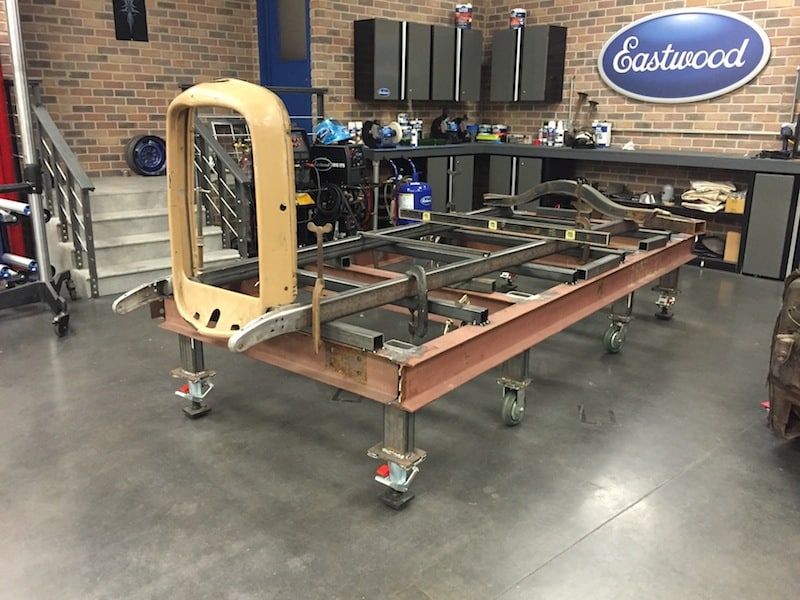 While I was on a roll I took a pair of factory Model A front frame horns and welded them onto to the extra material we left stick in front of the cross member. If you’re trying to stay to stock dimensions you will want to cross measure here to the factory holes on the horns. I decided to just eye ball what looked “good” to me before squaring them up and welding to the frame rails.

February 15, 2018 Roadkill Customs DIY Projects
For the 1955 Chevrolet Truck Project, we wanted to do something different with the tailgate, and a barn door tailgate was our decision. [More…]